Showing posts from February, 2007
Show all
- February 24, 2007
Or loosely translated as " Ridding the public of vermin " Some of you might remember I used to have a blog dedicated, at first at least, solely to produce hate messages against me - very uncreatively and childishly named "Xialanxue". (Don't try to go to his site, it now contains a spam address with irritating pop-ups) Throughout a span of a year, the blog owner (who is an anonymous coward of course) wrote many lies about me and caused me countless tears, striking especially hard to siphon fame whenever I was down or had some controversy going on. I did not know him (nobody who knows me will presume the absurd things he says about me), and yet he sounded like he knows the inside of my head so well, assuming my motives, my intentions, and boardcasting them to the naive internet world, who dumbly enough chose to believe him. Most annoying of all, he stood on high moral ground and preached to others how to live their lives, when he is just a nobody. He could b
Read more 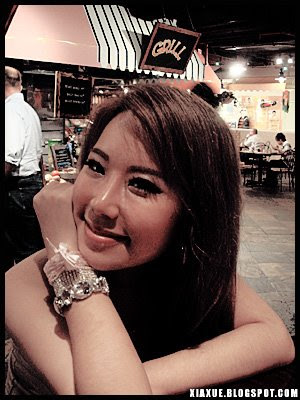 I am rich!!!!!! Although $325 may not be a lot compared to what some ah sia kias (rich people's sons) are getting, but it's still a pretty good sum of effortless cash! Daddy gave me the most money ($200), followed by a mysterious parent (I think it's Kelvin's) who gave the second most: $28. Angpows are sooooo shiok! It's the best thing about being Chinese, followed closely by xiao long baos (and various other cuisines such as the salted egg yolk prawns) and the beautiful language of Mandarin. This year I kept getting invited to prestigious houses to bai nian! Qing asked me to go to her sister's place (I actually yelped in excitement in the middle of mahjong) although I am forbidden to tell you guys who she is (if you guess it correctly in the comments I will delete it!). And then Ming asked me to go to this guy's place... HIS HOUSE GOT FLAMINGOS AND PEACOCKS WALKING AROUND CAN!!!!!! And it's supposedly super super big too!! Too bad the stupid Jun
Read more

- February 18, 2007
WOAH!! My muscles are aching ALL OVER!!!!! Momo and I went to Ikea and bought $350 worth of furnishing stuff (all paid by me -_- except for the paint which Momo kindly sponsored), including two new cupboards and a cute flower nightlight! Momo took my loft bed over to her room ("easier to vaccuum") and left me with a super-single mattress to sleep on the floor till she buys a new bed for me :D Many years ago when we just moved in here, I told my mom I wanted my room pink, so she bought pink paint for me... But I really don't like that shade (like strawberry ice-cream shade... I know! I am so difficult), so today ! I finally did something about it and painted a wall a deep shade of pink! I think I'll either put mirrors half over it or paint a mural. Meanwhile, Mike seems to have secured a job here (all fingers crossed), and it is my one true wish that he turns into a rich angmoh! Then I'll be one of those girls dating rich angmohs - which, I can only imagine,
Read more

Just got back from a holiday in Malaysia with Gillian, Rozz, Ashley, and their respective boyfriends/husband. Sorry for the lack in updates lar! I brought my laptop there and wanted to blog, but as it turns out there is no free wifi in M'sia. Sorry! We had SUCH great food in Penang! I officially call it the best restaurant in the world, coz they served the best lala, crab (cheese crab!) and prawns I've ever eaten, with the prawns being the most fab of all. It was shelled (leaving just the head and the tail bits) and deep-fried and breaded with what appears to be a mixture of golden-brown batter and salted egg yolk !! SOOOOOOOO good! I've been feeling very tormented lately coz I really want a tattoo and my mom and Mike both don't like the idea. I'd go ahead and do it, but Momo threatens to throw me out of the house, and I am scared that Mike gets repulsed by me or something. :((((((((((((((( And I REALLY DETEST the feeling that I am stopped from doing somethi
Read more 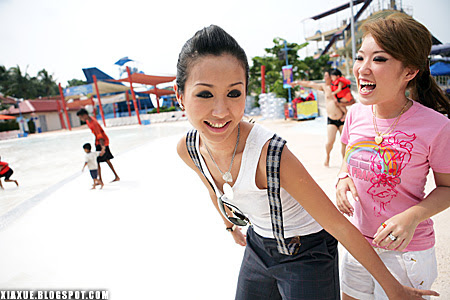 Ha! Just kidding! Anyway, I don't know why, but I've got nothing interesting to blog about lately! I've just been lazing around with Mike watching Dvds - Lost season 3, Prison Break I and II, and My Name is Earl (which is fucking hilarious I tell you) and basically pigging out. Teban Garden's ****** food place sucks! They tried to sell the poor angmoh 2 small pieces of tandoori chicken for $10!!! Bloody hell! Singaporean hawker vendors really shouldn't cheat foreigners this way! Someone told me that in Newton, some bloody Chinese hawkers sold some angmohs a bowl of shark's fin soup for $300...! $300, can you imagine? Those angmohs also stupid lar, should ask the price before ordering something that sounds like it could be very expensive lor. Crazyass bastards are so scheming!! Hawker people are horrible. I told Mike to repeat after me for future such scenarios: "I will not pay XX dollars for your laksa/dvd player/bananas. I will now take a photo of
Read more
More posts