I am bored at home!! Usually at this sort of time I'd have just woken up (4pm) and I'd bum around using the computer until 6pm then I'd go meet the rest of the bummers.

And we'd go out till 3am - reach home, chat with Mike in US till 6am, then fall asleep.

But thanks to Mike being here and starting work and his not being able to sleep with the light on, I am sleeping at 12am EVERY NIGHT!

Today I woke up at 7am to cook breakfast!! Then I washed the pot and bowl!! Good gracious me.

(Digressing, I never thought I'd catch myself saying TGIF coz I don't work and so weekdays or weekend is the same to me. Except I actually hate the weekends coz town is always so crowded with stupid working people.)

I can't stand it anymore! My computer is ridiculously slow nowadays!! Mike says that the problem is that I don't have enough RAM (anyone care to verify this?) and told me to get some more.

At the same time, I've got some money so I am gonna splurge it on a new LCD monitor screen!

YOU KNOW HOW CHEAP LCD MONITORS ARE OR NOT?!!

The cheapest 17 inch sort are like $250! Totally affordable! I always thought LCD monitors are like $799 or something and was perfectly contented with my fat space-taking old monitor till now.

Sigh, I am so superficial I scare myself.

This is not the one I want to buy, but you get the gist...

And to go with the lcd monitor I also need a new computer table!

What? I can't be using a nice classy monitor on my old old table can I?

I am SUCH a spendthrift leh...

That day, it was Xiao Feng's birthday, and my secondary school friends were reproaching me about how I never treated them to a First-Pay-Cheque sort of dinner coz I have been on the receiving end of theirs...

I felt really indignant and embarrassed at the same time.

They said that I got my first paycheck LONG before they got theirs (coz I went to poly, and they, UNI) and yet I never gave them a treat...

I don't know how to explain it, but I am just not that sort.

Firstly, I spend my money IMMEDIATELY once I get it, and I am rich for maybe 1 week before I go broke again.

Secondly, my paychecks, for the last 3 years or so, are not stably coming in every month, and most points in time I am barely surviving (due to over-spending shopping habits,and CABBING everywhere!).

I get, say, a $300 cheque for some ad, and then 2 weeks later I get another $500 for something else, and I don't even know myself when the next payment is going to come in.

While this lifestyle is comfortable enough for myself, I just can't justify spending money on treating other people to food.

I'm willing to pay $30 at best for the occasional treat for myself, but $150 or something for everybody's food just seems CRAZY to me.

At least if I spend $340 on a monitor it can be used for a damn long time, but food just turns to shit!

I don't even know how to explain myself to the rest that our lifestyles are just different, and people like me just don't do First-Paycheck-Treats.

None of the bummers do!

Zapzap doesn't even spend more than $5 on food, ever!

I told Qihua this situation, and she was nodding furiously in agreement, saying that her friends say the same thing to her (bankers and the sort), but her money all comes from periodical modeling, and once she is rich she spends it all on shopping - otherwise she will be quite broke too.

Wong da lawyer said, "I disagree, because the value of $1 is still the same for you and me what."

They quipped about my last season Stomp paycheck, which is a pretty hefty amount in the thousands.

But what did I do with my Stomp paychecks?

I'd spend my last cent on a cab ride.

If I don't have money to take cabs, I just won't go out! Fuck public transport. I had enough with wasting time waiting for buses, and sharing a minute space with smelly, uneducated people who are damn rude.

And they are always STARING! Hate.

I can't even count the amount of times I've been violated on public transport (ie MOLESTED) or the times I had to keep from screaming when I see a cockroach next to me on the bus window. If I can help it, why must I suffer like that ever again?


Maybe with the new Stomp paychecks I will finally muster up some money to treat them to something nice... but Momo just had to tell me that once we save up $10,000 we can move house!

And I really really wanna move!

And when I move I'd wallpaper my room with the new sort of wallpaper, you know, with the velvet prints... Rozz says it costs $1k plus.

I WISH LIFE IS NOT FILLED WITH ALL THESE BEAUTIFUL TEMPTATIONS!

And my latest craving is this totally useless thing:

It is making me go crazy!

Of course, PSPs are not useless, they are totally useful coz you can play games, listen to music, watch movies, or even surf the net...

BUT I DON'T NEED IT!

I don't take public transport anymore, so I don't get bored for long periods anymore, and the only time I think I'd really appreciate a PSP is when I am flying by myself.

BUT HOW OFTEN DO I FLY?!

Or when I am acting and there's waiting times in between... but I am not acting! 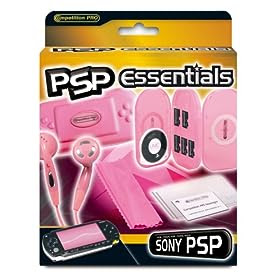 And the only reason I want it is because it is pretty and pink.

Blame Wong for making me go to Lucky Plaza yesterday, else I won't have seen it and won't want to buy it. Grrrr!

I can't believe I started this blog entry not knowing what to write and ended up writing so much.