I got the flu + fever + hacking cough + sore throat combo all rolled into one!

Poor Mike is so unlucky, he came here, and I was sick and grumpy for 4 days straight! I am surprised he didn't just go buy a ticket to get out of here.

Anyway, just about now is our 1 year anniversary!! :D

I was at a bar with him, and we heard Wonderful Tonight and I told him that if he wants to propose to me he has to sing that song. Muahaha!

Just now he sang like a bit and I kept telling him that that is a proposal and he can't just escape out of it and will have to marry me, and he is horrified. HAHAHA!

You know those fucking dumbasses who write stuff like,

"Why are you so shameless to say you guys have been together for 1 year? It is a long-distance relationship, so I bet it doesn't count coz you guys don't actually SEE each other!"

Firstly, I can call it 1 year, or a century, or even a peanut, and it is none of your business.

Secondly, YOU HAVE NO IDEA WHAT WE HAVE BEEN GOING THROUGH, SO SHUT YOUR TRAP - YOU HAVE NO RIGHTS TO TALK!

So are you telling me now that all couples from now on should only count days they are physically WITH each other as a "together" day?

Within a year, Mike and I met up 6 times, but each time we would spend a long time together EVERYDAY, so that's like 3 months of being physically together? 3/12 = meeting once every 4 days on average, yeah?

That's just like any other normal couple, you stupid dumbasses with nothing better to say!

So annoyed with people like this. Bet they are all sadly, sadly, left on the shelf and that's why they are so bitter!

ANYWAY, enough on this topic.

Except this one I took in zouk with Project Superstar winner Daren all while in DRUNKEN STUPOR: 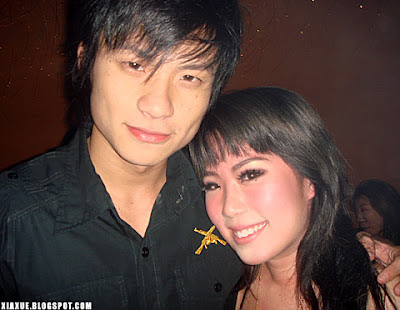 Kelvin and the rest FORCED me to drink a shot, knowing full well I totally CANNOT drink!!!

I got completely drunk, and Daren sashayed into members. I grabbed Qihua and I said I must must take a photo of Daren to put on my blog!

Isaac the siao heard me, and he actually went to Daren to tell Daren this!

Daren agreed to the photo-taking.

I was all slurry (but unfortunately not drunk enough to not have this crystal-clear memory of my embarrassment) and I then walked up to Daren and this is how the conversation went:

Me: Benjamin WHO?! (shouted the "who" into poor Daren's face)

(It was then at this moment that I realise that I have a great great talent scouting potential!! Look at this old entry, press ctrl F and type "sorbet".

It is an entry I wrote donkey years ago about how I thought Daren was talented and cute! See! I could predict future SuperStars! I even have a pic of him!

I can't believe I said Daren looks like a Si Wen Bai Lei (pretending to be decent) though. I am quite thankful he didn't slap me)

Me, after thinking back: EH! So you still with that girl?!

Daren found no suitable reply for this so he kept quiet.

Me: She's not very pretty you know.

*Palm forehead*
I can't remember what Daren replied or if he did at all, but after this I continued my drunken embarrassment:

Me, demanding tone: So you got girlfriend now?!

Daren: No no, single now.

After being high for 1 hour, I was dancing on the dance floor, and SUDDENLY all the moving, sweaty bodies around me smelled strongly like raw, slaughtered pork. Dead, bloody human-like flesh!

The smell suddenly overpowered me so badly that I felt really nauseous and I went to puke and then took a cab home! Time: 1.30am.