Lizards are fast becoming an obsession in my life!!

I hate them, and I love to kill them.

In fact, since yesterday I've tried to kill 3 lizards and successfully killed 2 of those 3!!! Mike killed another one with a F21 cargo box.

Bloody batch of lizards all have dark black spots on them. I KILLED YOUR ENTIRE FAMILY!! Roooarrr!

The escaped one was a baby which escaped my rapidly crushing tissue box... but soon... soon the little fucker will die in my hands.

The other two dead lizards are dead from a lizard trap that I bought!!

Here's my msn Convo with Eekean:

Pink is me red is her obviously 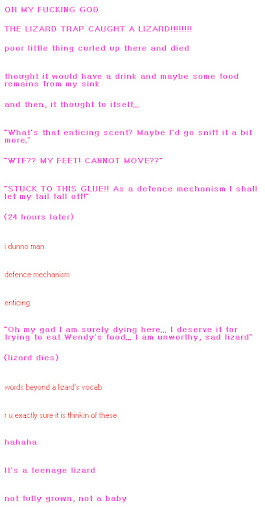 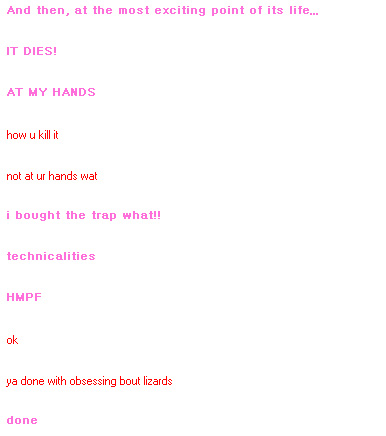 I've always had my doubts about lizard traps... Mike insisted on not buying them before, and his reason was that the bait, which supposedly gives out a scent lizards cannot resist, will actually ENTICE the lizards to come to our place.

But time has proven that enticing or not, the lizards come anyway!

Their favourite place appears to be the kitchen sink, where... believe it or not, lizards need to drink water too!

I suppose in their free time they also like to frolic about and playfully splash the water onto one another, then have disgusting lizard sex and give birth to ugly babies. FUCK YOU!!

They also like the living room coffee table, where, if they are lucky enough, we forget to sweep clear of little food crumbs.

WHAT THE FUCK IS WRONG WITH THESE LITTLE FUCKERS??

I mean, they get a wide variety of little flying insects to choose from, and yet, they seem to prefer to eat human food!!

What's their problem? Insects too gross for you to eat is it?!?

Russell told me that his friend once found a lizard inside a box which contained a single doughnut.

Only a quarter of the doughnut and an extremely fat lizard remained in the box!! Lizard ate 3/4 of a doughnut!!! SHIOK HOR? CAN EAT DOUGHNUT SOMEMORE!!

Therefore, I thus make it my life mission to kills as many lizards as humanly possible.

Even when I am sleeping, I must make sure some of them die... Which is why I bought lizard traps.

These traps are ingenious!!

They are made of cardboard, and you peel off a sticker, revealing a thick layer of glue - and at the middle of it all, a little white ball of innocuous-looking bait.

You fold the cardboard, and there is even a little hole for you to see if lizards got trapped inside, and a handle so that you don't have to touch the dirty muthafucker!

I bought 2 traps and both caught a lizard each!!

Unfortunately, by the time I saw its success both the lizards were dead.

How come so fast die?? I wanted to poke it with a satay stick to watch it thrashing around for a bit first...!! (Sadistic, but serve him right for trying to eat my food when there are plenty of flying insects for him to eat and make himself useful in the food chain.)

Maybe the glue is poisonous? Anyway, both lizards didn't manage to even go close to the bait, so they must have died with a terrible curiousity!!

Orh bi good. I hope their friends come and have a closer look and then, out of pure lizard loyalty, try to extricate the corpse and hold a respectable funeral for the dead. Then, they all get caught too!!

In fact, the live lizards then scream (in their stupid tsk tsk noises) for help and more stupid lizards die in my trap!!

MUAHAHA!!
In fact, last night, after seeing the first trap work, I had a dream that the trap not only caught FOUR lizards, it also caught, for some reason, 2 pouches of roach eggs (ewwwwwwww!!!) and various other grosteque insects!!

I was so happy in that dream can!!

On a sidenote, I've recently been very controversy-free, haven't I? I wrote a horrible poem about some girls and I free like posting it up, but it's quite mean and will offend many people. Should I? Shouldn't I?

Anyway, some blog reader told me to go read Dawn Yang's wikipedia page, and there I was, stated as the writer of the page!!

I assure you that I am most definitely not!

In fact, I tried to edit the page (of this libelous insinuation - please change it or I will sue you with your IP address), but didn't know how to!!

Wikipedia editing baffles me to no end. It's so confusing with all its minute works and HTML formatting. If I could I'd have certainly edited some of the things on my own page.. *grumbles*

(Apparently dating an Angmoh automatically makes me an SPG, never mind that all my other ex-boyfriends were Chinese... )

End this off with my SPG photo - clickable: 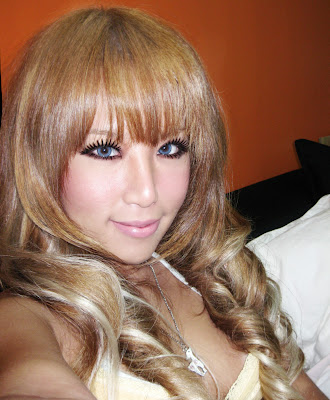 p/s: Thanks everyone who sent me lovely birthday smses!! I didn't reply coz I only saw the messages at 5am and I thought you all might be asleep already... And especially to Ghimz, XF, EK and PY for the "most practical birthday present you can ever get."

I stupidly asked if it's a pimple squeezer, but it turned out to be an angpow!!

Imma buy a Juicy Couture bag with it. What? What did I blurt out? I mean... Imma put it into my self-motivated CPF account for future rainy days.


UPDATE: To the many people who asked me what brand that lizard trap that is, I'm sorry but I really forgot! I threw away the packaging and was thoroughly skeptical about it until I saw it worked - but by then it was plain white cardboard.

Bought it in NTUC and it's one of those glue ones... I think it cost around $3 for 2 traps. Each trap seems to be able to only catch 1 lizard though (prove me wrong, anyone?), and lizards rot really smelly in death so you won't want to keep the trap around for too long after it died anyway.

(I was staring at the pink, bald corpse for a bit. It looks like a transparentish foetus/naked mole rat. REALLY GROSS!!!)

$1.50 for the death of a lizard seems to not be very worth it - so I guess it depends on how desperately you want to kill them! :D

And to those numerous people who told me to be kind/I will go to hell/lizards never harmed me why am I so mean etc etc irritating preachy people who try to tell others what to do: Fuck you.

Riiiiiight, I'm going to listen to you and become the patron saint of lizards suddenly!! Oh yes! I have been so cruel, and all it took was your grammatically incorrect web comment to wake me up and have a startling revelation!

You know what, preachers? If you want to tell others how to live their lives, go ahead and have a kid, so you can infuse it with all your amazing moral theories. Otherwise, nobody's interested.

White patch on my boob is, despite what you all think, not a mutated nipple, but my bikini tan-line.
- May 02, 2008
Newer Post Older Post Home