When I was 16, my dad had a friend who's a producer at the then TCS, and he went to tell her I wanna go into acting or something!

Seeing my very-much-less than mediocre looks, she told me that I can start off working as an EXTRA on films, and she gave me the contacts of one of then agencies who are responsible for extras.

And I "acted" in many shows! Ok la, I use the word "act" loosely... Actually I only walk around in the background. HAHAHAHA!

Don't believe me? Look what I found! 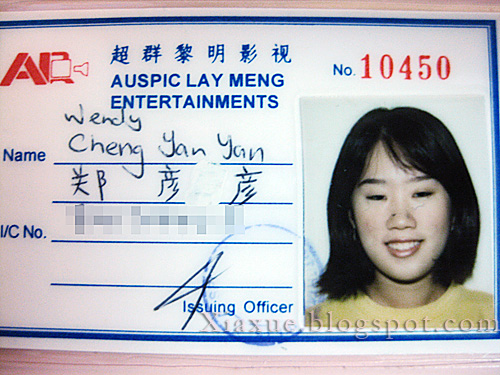 My old acting pass!!
Hahaha!! Very super chou right??? And I was still wondering why last time nobody "discover" me!!!!!!!!

What's with the half closed eyes man... How did my mother love me with such an ugly face??

So this Auspic or whatever company... Would dispatch extras to usually Mediacorp Channel 8 shows, where the job is sibeh low-pay and requires no talent whatsoever!

You know how low the pay is? Like freaking $2.50 per hour! The reason why people do it is because most of the calefares are either students or foreigners, and the job is really damn easy - so if you are lazy, this is a good job for you!

Basically, the calefares sit around while watching the stars do their job... This can go on for like 5 hours straight. Then, when it's our scene, we do a walk or whatever we are required to do, and that's it!

I remember there used to be these crazy loserish people who do this job simply because they are so starstuck.

There was this fat chick who was like 20+ and she carries around this photoalbum of all the stars' photos and would show them to anyone she can - and she will boast that Zoe Tay knows her by name, etc. Every single day she goes to TCS and hangs around there lor!! She was damn fugly man. I was quite scared of her over-zealousness.

So anyway, I really can't remember much of the shows I acted in, except for...

- a lot of episodes of the first season of Moulmein High (I was a student),

- A show about probation officers and Celeste Chong was blind in it,

- Some show where I was a nurse, and the doctor beside me actually used the "Wo men jing li le" phrase when his patient died.

- Confirm got more but I can't remember la!


I wish wish wish that I can watch Moulmein High again!! I was a librarian and even sheeshed someone ok! Talking scene hor!! Excitedness!!

Wo lai ye was a period drama... So we had filming at this HORRIBLE place in Tuas where they use for filming all local period dramas.

My god, I tell you, that place is a bloody HELL HOLE. I don't wonder why there are no more period dramas now anymore - I bet the directors and actors all can't stand that place!

First, it is RIDICULOUSLY hot there. There are derelict buildings scattered here and there, but these buildings all do not have airconditioning (then la... 8 years ago).

And worst of all, there are whole colonies of tiny flies that hover in a cloud above the sand. Hundreds and thousands of them! Sometimes you stupidly enough walk into a cloud of them, and they swarm around your face and shit. OMG!!

But never mind that, because the flies cannot attack our baked bodies as period drama costumes involve wearing 3 freaking layers!!!!

Who said acting is easy man!?

Anyway that's it la. That's just one of the old fugly photos I wanted to show you guys. When I finish editing I post them up!!

Ta! Have a good weekend!


p/s: Congrats to the Singapore women's table tennis team. May we get our first gold medal!!!!!!!! Woohoo!! I am so proud of Singapore!!

p/p/s: Weightlifting is so scary! I saw a clip of a weightlifter who lifted his barbell and suddenly, one arm bent over backwards at his elbow, severely dislocating it!!!

The weightlifter fell to the ground with one arm is a very very very awkward and scary position, his elbow very prominent but not thankfully breaking through the skin. His leg even spasmed twice before he presumably fainted. OMG!!!!!!!!!!!!

Another clip (which I didn't see but heard off) was of a weightlifter being crushed by a 140 kg barbell??? He must have a pound of minced meat left for whatever was crushed man!

How is this even a sport??! It's so freaking scary and dangerous! Why can't they compete pulling a truck fastest instead??

p/p/p/s: Normally I can't be arsed about the Olympics la but I was at Munkysuperstar's office today and everyone was cheering Li Jia Wei on, so I got a bit infected.