- March 30, 2009
Shuyin and I were talking about checking our bfs' phones/emails/fb/whatever yesterday and I told her I don't often do it, but maybe I really should because I am always hearing stories about girls finding out about their bfs' cheating that way.

So on the spur I asked Mike for his FB password and logged into his account. The last time was when I changed our status to engaged and I didn't check his inbox then.

To my horror I saw this in his inbox: 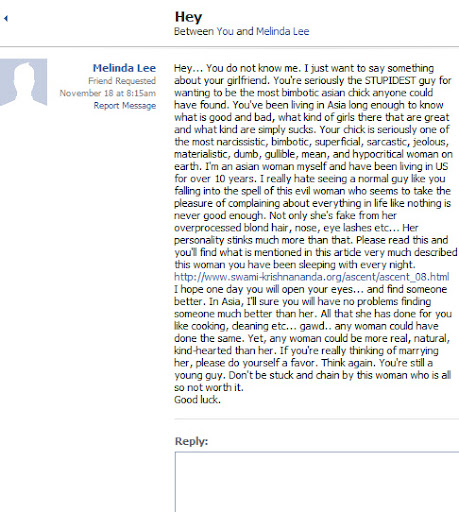 Don't bother squinting to read the words, I've decided to be nice and paragraph it nicely for you guys, since this woman clearly doesn't know how to.

I just want to say something about your girlfriend.

Your chick is seriously one of the most narcissistic, bimbotic, superficial, sarcastic, jeolous, materialistic, dumb, gullible, mean, and hypocritical woman on earth.

Not only she's fake from her overprocessed blond hair, nose, eye lashes etc... Her personality stinks much more than that.

Please read this and you'll find what is mentioned in this article very much described this woman you have been sleeping with every night.
http://www.swami-krishnananda.org/ascent/ascent_08.html (MUST CLICK!!!!!!!!!!! FUCKING HILARIOUS)

I hope one day you will open your eyes... and find someone better. (Like YOU??) In Asia, I'll sure you will have no problems finding someone much better than her.

All that she has done for you like cooking, cleaning etc... gawd.. any woman could have done the same.

Yet, any woman could be more real, natural, kind-hearted than her.

If you're really thinking of marrying her, please do yourself a favor. Think again. You're still a young guy. Don't be stuck and chain by this woman who is all so not worth it.


Aren't you glad you are not someone famous and have to deal with people talking about you like that to your boyfriend?????

So this Melinda person - probably not even her real name, dislikes me so much that she specially created a facebook account to send a message to Mike to tell him to break up with me!

(And I tried to add her to find out more about her until I saw that she has no friends on fb and is probably not going to log on again.)

Reading what she wrote makes me damn annoyed and yet feel utmost pity for her. Seriously, how sad must this woman's life be for her to be so boh liao????

It makes me annoyed because people presume so much about Mike. What makes this woman think that Mike deserves any better than me?

He could be a violent sex offender, lousy in bed, heavily in debt, stinks real bad etc... for all she knows! He is not any of those things lah but I'm just saying!

Worst, Melinda has no idea what Mike and I went through together to have what we have today.

Does she know that Mike came to Singapore to work specially for me? Did she know he had to stay in shitty Teban Gardens in a dingy 3-room flat before he finally found a job after 2 months?

Does she know that during Mike's college days he was so poor I had to pay for his air ticket (not to mention my own) to come to Singapore?

Does she know that Mike used to commute everyday from Jurong to Loyang to get to work, just so he could have a life with me?

She doesn't know shit, yet she's like Oh, break up with her already...

Roll eyes. Well guess what Melinda? We just got through our 3rd year anniversary and we are more in love than EVER!

Doesn't it just make you SICK?

Sickly jeolous maybe? (For goodness sake man what's with the inability of ALL haters to spell jealous? Is it that hard?? J-E-A-L-O-U-S?? Is it just me or have all the hate messages you've ever seen on the internet spelt jealous wrongly?? Are they all the same person?!)

It embitters you doesn't it Melinda, to see a godly, good, natural (albeit ugly I'm sure) woman like you not land a good, rich and cute man like Mike?

Well that's coz you are VILE inside. :)

And what's with all the references to Asian Asian Asian?? Why am I being compared to Asian girls only? I mean, does it mean if other ethnicities are involved I will fare much better coz Asian chicks all rule or something?

And I don't cook or clean btw. Yet he still loves me! Whoopie!

narcissistic - Not a bad thing. I.e. does not harm anyone.
bimbotic - Ditto
superficial - No leh I just read Swami! Am totally spiritual and above all now.
sarcastic - Seriously not a bad thing, plus is skill not many have
jeolous - No idea what this means.
materialistic - Is being great by helping crumbling economy via shopping.
dumb - See jeolous. Refused to be judged on intellect by retard.
gullible - Most certainly not.
mean - Guilty.
hypocritical - That I am definitely not too.

I couldn't even read pass the first sentence can??

"The self-affirmative urge in the individual is too crafty to be contented merely with a simple act of affirmation itself." WTF DOES THIS EVEN MEAN??

"It manipulates itself and works its ways through a personal concrescence of form as well as a social relationship of attitude."

What the fuck is "social relationship of attitude"? That doesn't even make sense. Concrescence... I checked and it means like some biological plant part growing together... That is like how irrelevant to the sentence. Swami must be a good thesaurus-er!

It amazes me how someone who can't construct a proper sentence can read text with words like rapacious, virulent, antecedent, misnomer, spatio-temporal.... blah blah blah.

After scanning through Swami's words of wisdom, I am forced to admit that he is full of shit and Melinda is ding dong.


Anyway... Being pushed into a foul mood by Melinda, I also replied two other chicks: 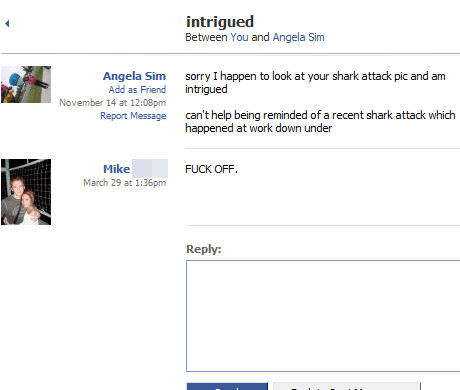 What the fuck is wrong with her? Does she expect Mike to go into an animated shark discussion with her?

Oh really Angela, did a shark attack happen Down under? Tell me more!

No thanks fuck off. Go make friends with females and stop messaging random men who intrigue you, shank. 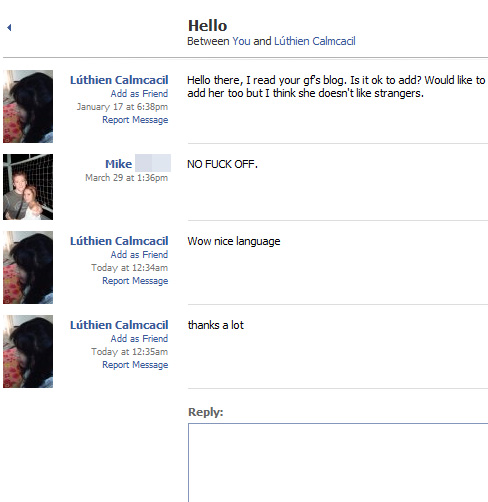 DO YOU KNOW MIKE? If not, WHY would you wanna add him? Are you that desperate to appear to have more friends on fb??

If I don't like strangers what makes you think HE does?


WHO THE FUCK ARE ALL
THESE RANDOM PEOPLE!!


Anyway, I'm not really jealous of these girls or being mad possessive. And I know they are technically not flirting with Mike. BUT! I just don't like them and it makes me happy to tell people to fuck off. So there.


And I am incredibly proud of Mike because he didn't reply to even one of these girls! Hurray! He is quite annoyed with me for being so rude to these girls in his name though. Whatever lah!


p/s: Mike is sprouted some gems yesterday. I was talking about flirting with others while being in a relationship and how my friend said it is TECHNICALLY not considered cheating. Mike frowned and said "Here's the litmus test - if it will upset the other party when they find out, I think it's considered cheating. So if you have to hide it, you shouldn't do it."

p/p/s: I am STUCK AND CHAIN with Fever and Flu!! All these girls will be glad to know.

p/p/p/s: I have finally edited all photos and will post them up by tonight.