But it's not my fault that nothing has been angering me recently! Reminds me of the good old days when Plasticzilla threatened to sue me and jolted me to blog like 10 times a day.

Time really flies doesn't it? Would you believe it... In 2 months' time it would have been one freaking year since she yabbered some rubbish about being very determined to sue!

Come and get it!

Ahem anyway enough about Powdery Plastic Plagiarizers! (I totally made that up isn't it ingenious?! PPP!!!! HAHAHA)

I've finally had enough of lousy compact cameras, and I BOUGHT A SEMI PRO one!

It's the Panasonic Lumix Lx3!!

I've always thought there are your normal digicams and SLRs and nothing in between, but there is!

SLRs were obviously out of the question for me because I won't bother to bring it out since it's so goddamn heavy (and ugly - totally un-zhng-able man).

And I've been complaining about my Canon Ixus for the longest time. Everybody loves Canon and maybe it is indeed the best among the compact cameras, but still... There are limits.

I find that my ixus's flash is way too strong and consistently overexposes close subjects. If I do not turn on the flash, the photo will turn out either too dark or completely blur.

I love taking Macros (close-up shots) but the macro mode does not allow flash and for some reason it is ALWAYS too dark.

It's just annoying lah... For example right, to get that photo of my ulcer, I had to take like seriously at least 30 shots before I could get one that's not blurry.

I HATE it when people help me take photos and they go and shut off the flash simply because everyone looks less harsh without flash. WITHOUT FAIL THE PHOTO WILL BE BLUR.

Or orangey. Very annoying right? What a waste of time!

And blurry non-flash shots are so fucking irritating because sometimes the moment just passes you by and all you have left is a photo of indistinct shapes.

Flash shots might be bright and harsh but at least it will ALWAYS be sharp. The rest can be edited by photoshop.

Nonetheless I love that Canon's cameras take really vivid photos. That I have to admit is better than my old Sony compact cameras. (Although admittedly Sony takes better macros lah.)

And for some reason the Powershot E1 I was sponsored (Remember the candy pink camera?) performs much better than the Ixus!

I gave that to Shuyin for her birthday though. I meant to wait till 19th of April to surprise her with it but the stupid woman came to my place and saw the camera box on the shelf and asked me why I chose white for the camera instead of pink.

I tried to patronise her but she kept asking questions so in the end I just gave it to her early. Neh neh!

So anyway back to the Lx3.

I knew I wanted a new camera so I stopped at a camera shop at Far East thinking of getting a Cybershot specifically for macros. I asked and the guy said the model I was looking at is selling for $320.

Then I went to Sim Lim.

I said I will think about it and walked away because the storeowner was becoming very aggressive.


I floundered around a bit more and went to more shops irritating store owners by completely not knowing what I want because I didn't do any research and didn't know what kinda cameras there are.

No research because words like "F2.0 2.5x 24mm ultra-wide angle lens" scare me to death. Who the fuck knows what that means?!

Anyway finally this young salesgirl was being nice and patient to me!

Me: "I want a good camera. I don't care about the price but I want something not too big! Do you have anything like that? Like in between SLR and those." I pointed to the mass array of colourful compacts on display.

Actually I have no idea if those cameras are called compacts but I can't be bothered to find out.

She tried to coax me to buy another small Canon camera for a bit until I told her I already have that. -_-

And she finally brought out the Lx3!!

She took a picture of me in the store and I WAS SOLD.

And best of all it's really not big (about maybe 30% bigger than my canon and amazingly about the same weight) and it comes in silver (besides dull black), which can be zhng-ed!!! 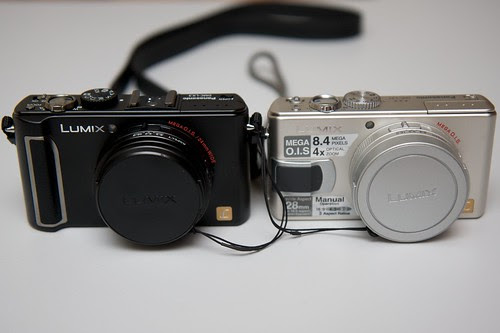 See the lens cap? It can be detached completely from the camera. To prevent you from losing the cap, the camera has two loops for you to thread a string through!

MUAHAHAHA MY "STRING" IS A STRING OF CHIO WHITE PEARLS!

I threaded the pearls with a transparent fishing line!! WOOHOO! I am mega innovative!

I'm now waiting for my diamantes to arrive, and when they do, Imma transform the whole camera into this bimbo looking toy!!

Then after I take the photos people will go like WOW YOUR CAMERA TAKES SUCH GOOD PICTURES!

And I can huff and go like "EXCUSE ME IT IS A SEMI-PRO AND IT COSTS $700 BUCKS OF COURSE TAKES GOOD PICTURES RIGHT! YOU SOUND SO ILL-INFORMED. THAT WILL TEACH YOU TO JUDGE PEOPLE BY THEIR LOOKS!"

Totally hmpf and walk away.

I posted about my purchase on fb and suddenly loads of people were complimenting me on my camera choice and Rozz and another blogger friend Coleman totally has the same camera!

Why didn't anyone tell me about the Lx3 before?!

I fucking LOVE the photos it takes man.

- Non-flash photos are never blur unless the subject is like Pumpkin bouncing around.

- The colours are totally vibrant.

- It can do the depth of field/field of depth thingy.

- It lets me name 2 babies (left blank) and a pet!! I'm serious! It has a doggie mode and you can put in the name of your pet and its birthday!! Everytime I take a photo of Pumpkin her name appears and the camera tells me EXACTLY how old Pumpkin is (down to days)!

She just turned 6 months btw. I won't know if not for the camera. I suppose the people at Panasonic think that people who buy Lx3s all are the sort of people with 2 kids and 1 dog. Just goes to show them - Rozz, Coleman and I all don't have babies hor!!

- Accidents when you try to take an upskirt photo sneakily and the flash comes on, embarrassing you to death? Never gonna happen because you literally have to manually pop the flash up or it will never go.

There are also loads of other good stuff about it lah but it involves talking about ISOs and that makes me slightly nauseous so I am not going to.

This blog entry is so boring!! You think so? Well fuck you! Hahahahaha! I love my camera wheeee!!

Ringo also got herself a swanky camera some time ago and I told her I was thinking of getting a nice camera too. She told me I really should do it and I won't regret it!

Completely true man. Now I look at my old photos in major distaste. They are all so gross and FLAT looking. Is true story.

I took loads of pics with the new camera so hold on for them!

p/s: I am totally singing my own gabbled version of the Korean Nobody song by Wonder Girls as I am blogging. It's stuck in my head. I wanna learn the dance!

p/p/s: Anyone else plays Word Challenge on FB? My high score is almost 63k!! I am totally amazed by my ability to decipher anagrams!!