Today I learnt something new!! 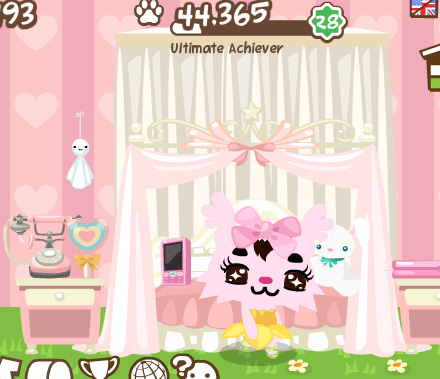 I love Mondays because Pet Society and Postsecret updates!! Anyway, for those of you who don't know, Pet Society is a game in Facebook that allows you to decorate your pet's room with various items!

That's my pet "Pumpkin" right there in front of her bed.

Anyway, Pet society sold the white ghost-like toy you see on the left side of the bed (I put it there for the purpose of this screenshot).

I decided that since I have no idea what it's for, it shall serve as my pet's toilet's hand towel. What! It does look like it could be used to wipe hands what!

I was just about to put it beside the mirror gleefully when I decided I shall first find out what a Teru Teru Bozu is.


It's a good luck charm for fair weather! People hang them on windows!!

Thank god I didn't put it in the toilet!!

Since I now know what it's for I shall be the only knowledgable fucker who puts it at the correct place muahahaha!!

I totally felt pleased with myself and showed Shuyin the wiki entry, only to have her immediately exclaim, "Ooooh Qing Tian wa wa!"

Which means "Fair weather doll" in Chinese. These dolls are apparently very popular in Taiwan too. She knew about them since long ago.

How come only I don't know shit like that?!

The Japanese Nursery rhyme for it has a line that says

"But if it's cloudy and you are crying (i.e. it's raining)
Then I shall snip your head off"

The Japanese kids are so unreasonable. Poor doll gets head snipped off despite having absolutely no control over the weather since it's just a stuffed doll.

On hindsight I also often threaten people like that.


On the note of being ignorant, I got incredulous looks from Kaykay that day before I didn't know that:

1) Highways going in opposite directions alongside each other do not necessarily have the same exits. For example, TPE (PIE) has a Lorong Halus exit but TPE (SLE) does not. WTF???

2) ALL MRT stations have some form of ATM machine from a major bank. I can't be blamed for this as I don't take public transport very often anymore. (Small voice: I am too famous...)

3) When your car skids out of control, you should turn INTO the skid instead of AGAINST the skid. Explanation here.

Like for example if it skids left you oughta turn LEFT instead of right like your instincts will tell you to.

Kaykay said this is common knowledge as it is mentioned in the Basic Theory book. I took that test about 7 years ago and for the life of me do not remember ever reading that. I guess I should be glad I can never skid as I haven't taken my test yet???


BTW regarding those of you who asked me about my driving - I've been procrastinating as I think my driver instructor really sucks. He doesn't ever listen to anything I say - like he literally cuts me off halfway and gabbles some rubbish he thinks is funny, and he doesn't ever answer any of my questions properly.

And he is really busy all the time too!

And he is constantly talking!! That day he drove past some carpark and he said he saw his friend (a middle-aged uncle like him I suppose) in the car with his China mistress. He started to talk about how Singaporean men like him get lonely and get mistresses and it just made me goddamn uncomfortable can.

I started insulting these Cheena sluts in a vicious way and he clearly disagreed and we fell into an awkward silence.

Then he'd ask me what I do for a living.

This is a question I often get asked by these stupid people I cannot be bothered to explain myself to. My most common retort is that I am a "writer" and I write stuff. How can I say I am a blogger right?? They won't know what it is!

Then the nosy people go like "where do you write are you a reporter??" and I just vaguely say "the web" and hope they don't go on more.

My instructor then goes on, "Woah! The money good ah? You so free can come have lessons anytime? Wow can dye your hair so blonde ah? Eh how you earn money on the web? Teach Uncle leh..."

Even with my half hearted grunts he goes on in a relentless taxi driver way.

"Wow you must be rich! Wow you got tattoo ah? Eh Uncle also got this student got tattoo. You know what not? Is a lizard. Lizard leh behind the ear like you. Go gear 4 now."


So anyway I wanna change instructors but I don't know how to break it to him! And my test date is booked under his IC number. How sia?!

Anyone with good instructors? I am open to learning manual or auto (I've had like maybe 10 manual lessons though but I still suck at it and driving off from a hill makes my car roll backwards and freaks me out so much I start hyperventilating). Email me email me!! xiaxue@gmail.com