New love of my life.

Today, I shall introduce to you my new love.

His name is Berry. Blackberry that is!

IRL I've started crazily evangelising about the BB to everyone who is capable of using a cellphone.

It got so mad that Mike even commented, "What's the difference between a Mac evangeliser and a BB evangeliser (me)?"

The difference, Mike darling, old love, is that the BLACKBERRY IS AWESOME!

Nowadays, when I realise anyone is also a blackberry user, I start to endlessly gush with that person about how great which functions are, etc etc. We sound like idiots.

Months and months ago Kaykay already got her first blackberry, and she kept on pestering me to buy one.

Like seriously, she asked me AT LEAST (100% serious) FIFTY times. She'd type on the phone, and suddenly shout at me, "Go buy a blackberry!"

It's infinitely annoying and I always responded that I am super in love with my special and pretty Juicy Couture Sidekick.

"Your phone is a useless brick," she'd add, and go back to typing on the CB machine before I can even give a face of rage.

It has come to the point where I started to resent her blackberry because she'd never pick up calls and instead choose to communicate via SMS... Which I found really frustrating.

Imagine going back and forth about what time to meet and blah blah blah... All when it can be done through an easy phone call!

One fine day, I saw her on msn and asked her how come she is online, when she virtually never used to be.

She said she applied for the unlimited data plan and from now on will be online 24/7!

"Yeah... Go get a blackberry!" she yelled at me for the zillionth time.

"Don't want. I hate all these pda phones they are so confusing. I just want something simple for phone calls and SMSes." I retorted.

"I know it sounds really messy but it is really, really, simple." she said.

And I checked out her phone. What she said was true, so I bought the Blackberry Javelin.

I got to say, it's one of the best gadgets I've ever bought, right along there with the Lx3!!

And I'd show you why!

But first, the biggest problem with the blackberry is that it's REALLY MUTHAFUCKING UGLY.

I don't know what RIM (BB's company) is thinking, but all the models with a qwerty keyboard are like black/silver with immense hideousness. Hello RIM, haven't you realised that not only corporate bores use your products?!

So here it is, blinged: 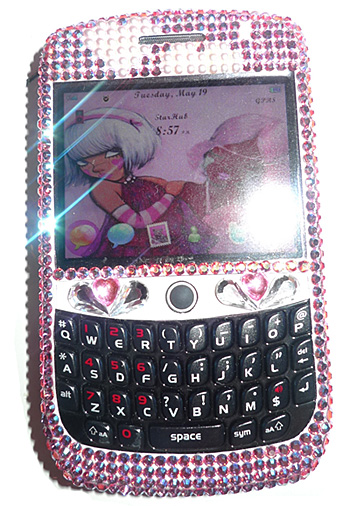 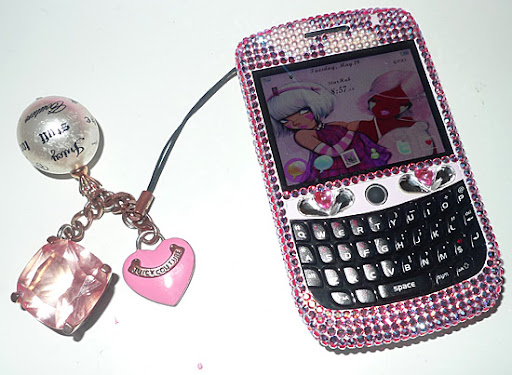 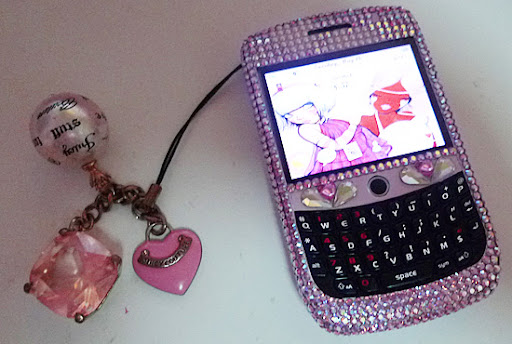 Without. The patterns on the top are pearl hearts. 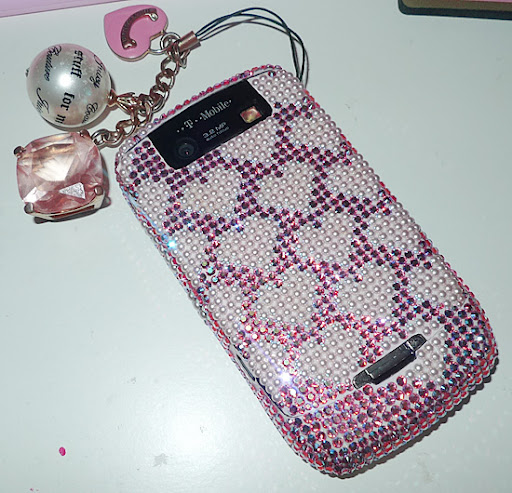 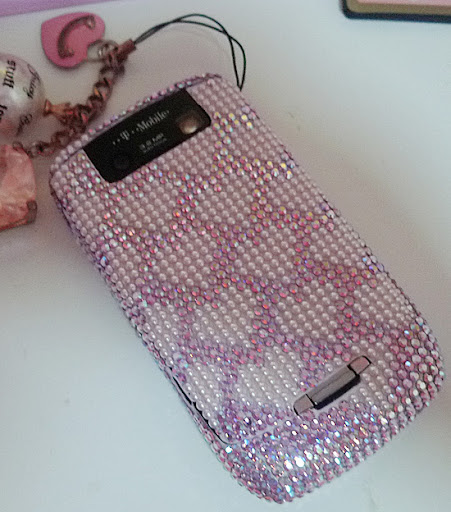 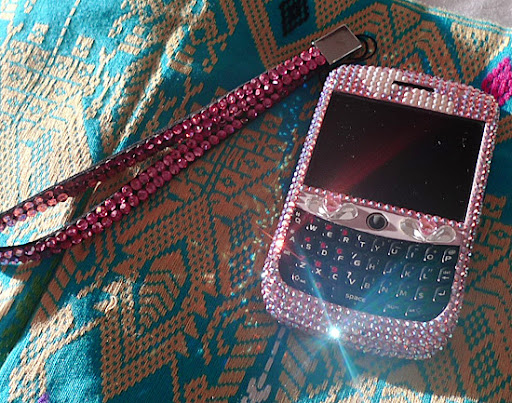 And etc nonsense like paid applications... I spent so much on this. But it's all worth it coz so many people are enjoying it! :) 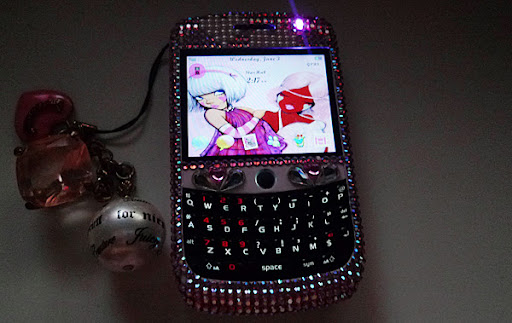 Just a few days ago I realised that the blackberry's little flashing light on top can be changed to 7 different colours via an external application! It used to be just dull green/red - now PINK!

And to boot, as you can see, my phone has a really pretty Fafi theme!

Themes can be downloaded free (mine is) and there are super awesome themes all around like Chanel, Juicy Couture (yes and more than one!), Hello Kitty, Coach... So many!!!


AND NOW I AM GONNA TELL YOU HOW AWESOME THE BLACKBERRY FEATURES ARE!


I don't care if it's geeky and uninteresting. You should still read and go buy a blackberry!

Blackberry Messenger, or called affectionately BBM for short, is the best thing the blackberry has to offer. Most people would say it's the Push Email function (Email sent to your phone with an alert just like an sms), but personally I don't see why emails are so important they have to be opened on the spot.

Anyway, back to BBM!

BBM is a chat service for anyone with a blackberry and a blackberry data plan. All you have to do is to exchange a PIN number with your friend, and add them!

BBM is 100% free (not counting data charges which is a flat charge anyway) for all BB users... Get this... INCLUDING THOSE OVERSEAS!

As long as you are not roaming, you can use BBM instead of smses to communicate with friends all over the world! Perfect for LDR couples!!! 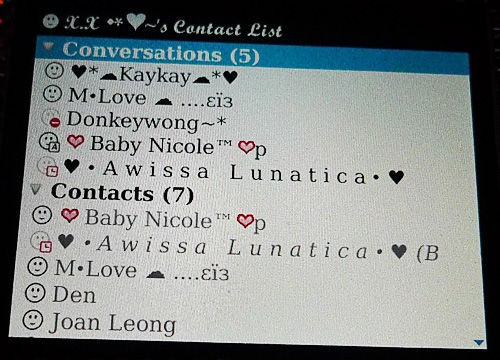 My friends list.
Eh my phone was resetted so people I've added and lost please add me again -_- 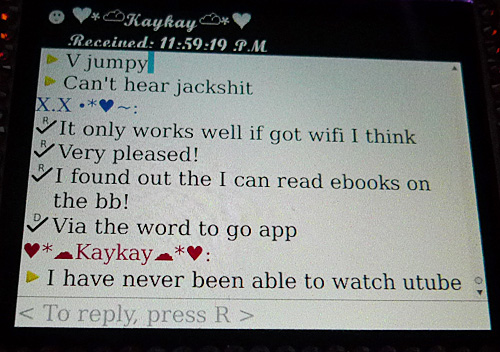 Here's my chat with Kaykay...

See the tiny ticks beside what I typed?

This means that I know if Kaykay saw what I wrote and chose to ignore me!

Via BBM you can also group chat, send files, etc. It's fucking awesome. 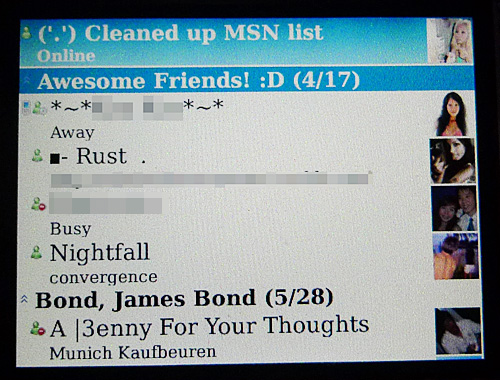 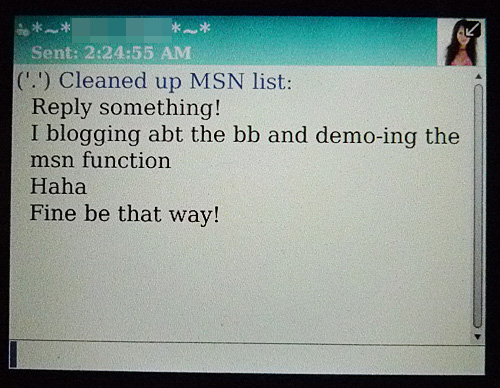 That's me chatting with Kaykay again. She disappeared somewhere so she didn't reply me.

This MSN application is actually done by RIM in-house, so when you apply for your Blackberry data plan with your phone provider, you'd automatically have it.

You can let MSN/BBM run in the background and do other things on the phone. When someone initiates a chat with you, the phone will ding and let you know! 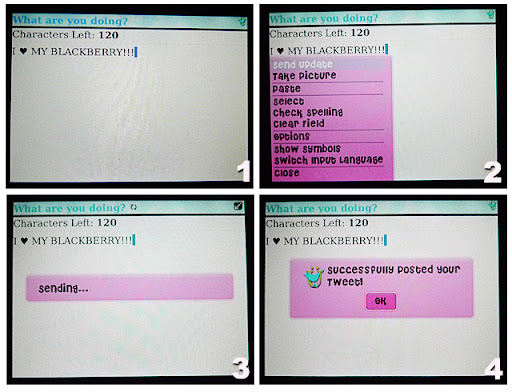 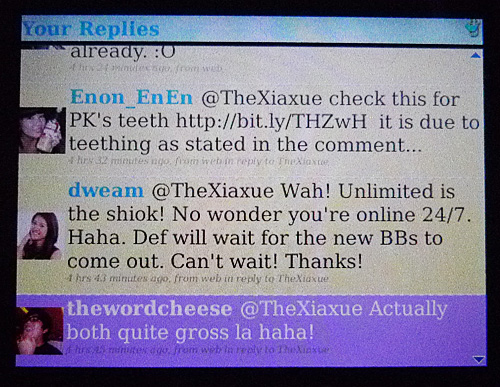 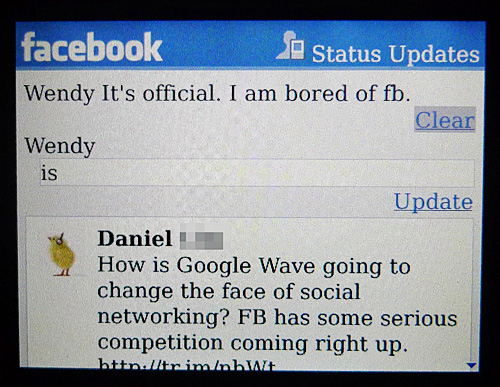 Update your status or scroll down to read all your friends' status when you are bored. The interface is really neat and easy to understand. 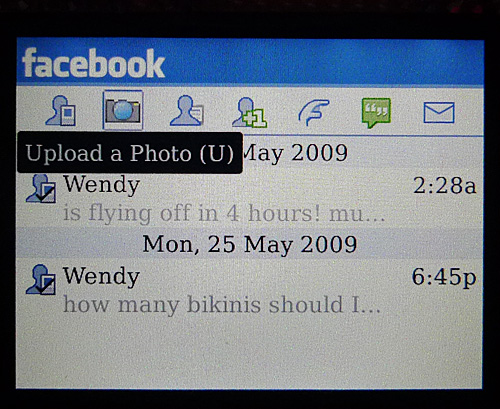 Upload a photo (even auto creates an album for you called "Mobile Uploads"), poke someone or send an fb message. All simplified. 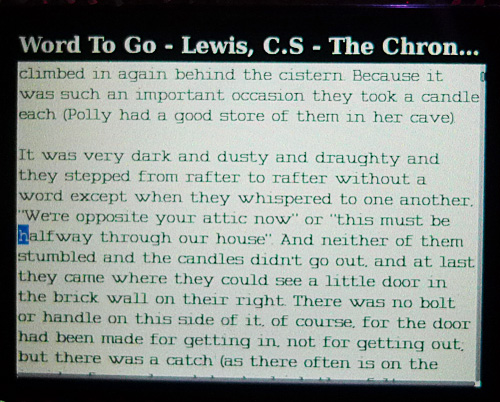 What I'm currently reading on the phone. 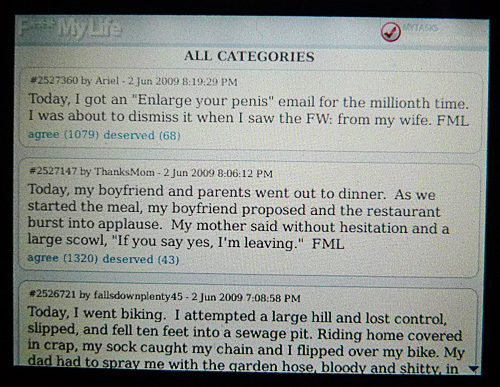 I was delighted to learn that FML now has an application specially for Blackberry users. It's fucking entertaining and I read it every single night before sleeping. =D 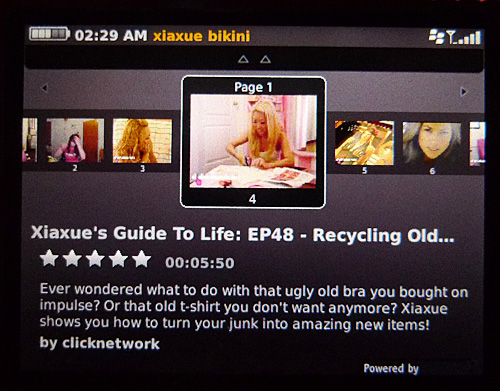 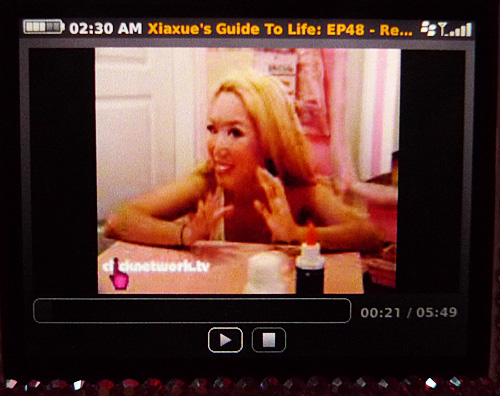 Watching my newest episode of Guide to Life via an application called Vision. I won't say the quality is fantastic, but it will do! And sound is good! 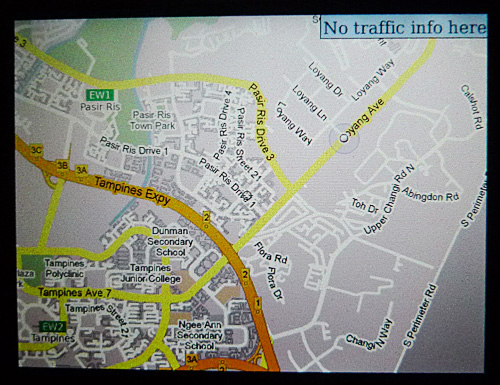 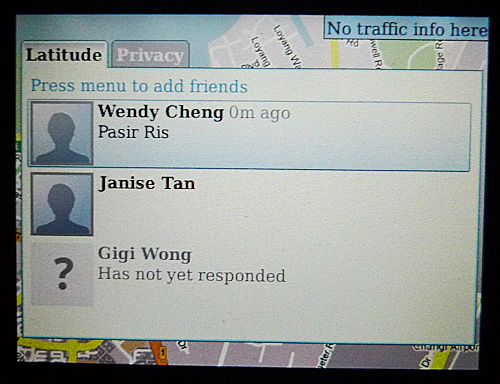 Built-in GPS function in phone...
And Google Latitude... This has to be the BEST FUNCTION EVER CREATED FOR DISTRUSTING COUPLES.

Is your boyfriend missing again? No fear... Get him a blackberry and Google Latitude lets you track where he is exactly!

Now he has NO EXCUSES unless he delibrately turns off this function (something to hide) or leaves his phone at home (like that how to contact his mistress hahahaha!). 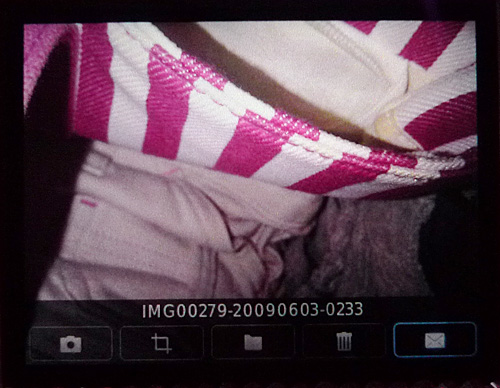 I snap a shot... Automatically Blackberry gives me 5 iconic choices:
- Take another picture
- Set picture as...
- Rename
- Delete
- Or the last choice there... 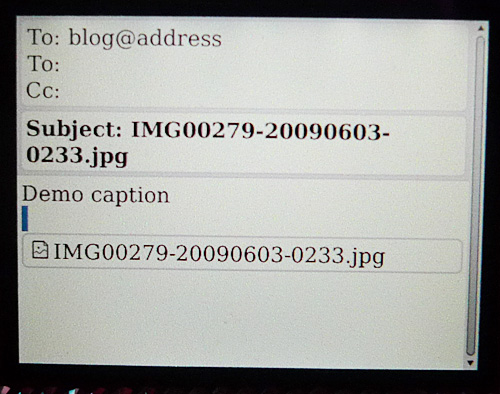 To the secret blogger email address for my blog. Type in a caption. And hit SEND. It's that simple. 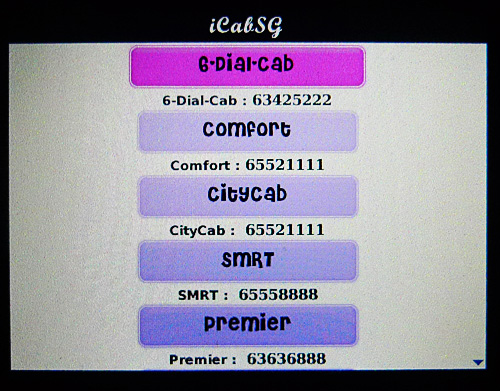 Little cab application that came with the phone. Love it! 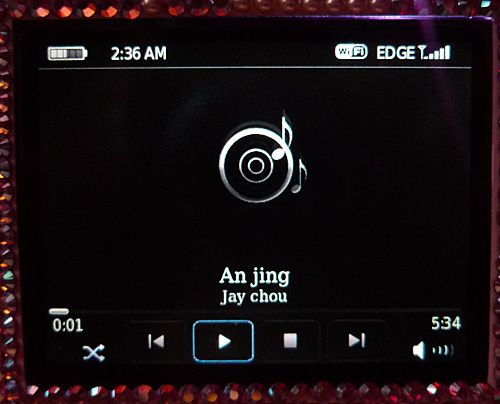 Music player exceeds expectations. Very easy to upload songs (suck my cock itunes). Just plug into the USB port and drag and drop your mp3s into your memory card! No need for any program software.

And surprisingly enough, the speakers are really good! 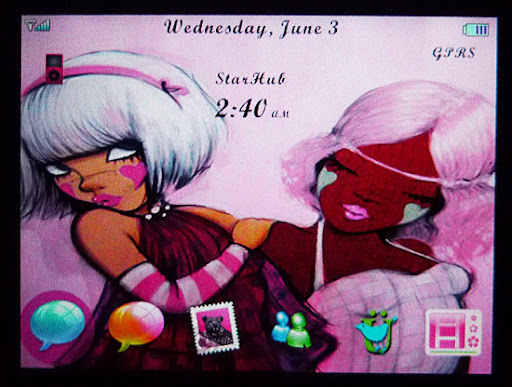 My homepage with 6 shortcut icons for SMS, BBM, Email, MSN, Twitter, and Pictures!

These are of course not ALL the functions the blackberry has, just my favourites!

I also super love it that the phone lets you assign speed dials according to LETTERS!

So S for Shuyin, B for my baby, K for Kaykay and so on! Now you can have 26 speed dials and don't have to remember which person is what number anymore!

SMSes are also sent in chat formats. :) This explains why KK loves smsing so much.


Oh and one last thing.


I was shocked by my blackberry that day. 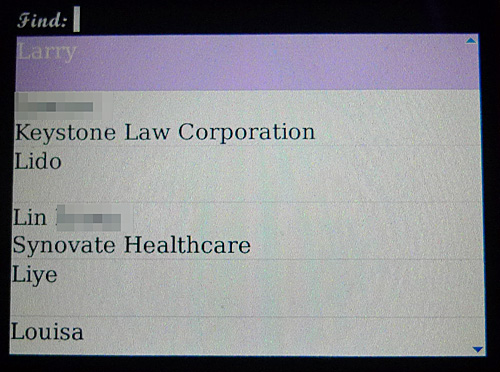 Some of my contacts had their companies listed under their name!

HOW THE FUCK IS THIS POSSIBLE?

As you all know Sim cards are only capable of storing Name + phone number and nothing else!

And I myself didn't even know "Lin" worked for Synovate Healthcare!!!

So how did the Berry find out such information?!?!!? 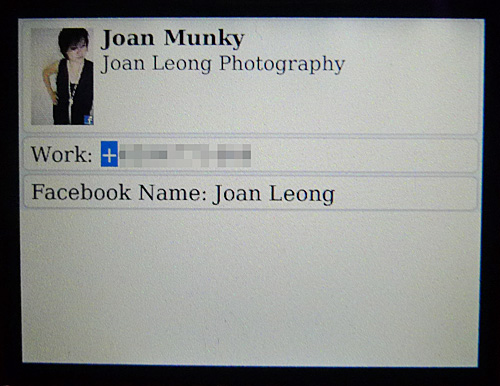 Via their phone numbers!!

How about that for putting the smart in smartphones??

So in conclusion, everyone should get a Berry!! The reason for this blog post is not because RIM paid me for an advertorial or anything like that (although they OUGHT to!) - but because BBs are only fun if more people had them!

Spread the love and suck on my balls iPhone!

Linkies for BB users because I'm great like that: