Everybody blogging about Jack Neo I also must!!!!!!!!

I just saw the clip of his media interview! I know I'm late but sorry lah, people busy getting married.

I mean everyone said it was dramatic but I didn't know it was THAT dramatic lah!! It like totally involved every dramatic element in your typical Channel 8 episode... Fainting! A gangster yelling!

Maybe just not the raping (almost! If only the French girl said yes!) and lack of a semi-retarded person who is also very likeable coz he/she is so innocent and doe-eyed.

And since it already looks so fake I'd suggest that, for the extra PR's sake, they employ a professional (*ahem, me*) to script it out for them. Seriously. I'm good. I've watched many Channel 8 shows and so I know all their cliched lines.

So here's my suggested script. You'd find that it is a lot better than theirs. I've tried to put in a scene where lovers yell meaninglessly at the ocean or play with sparklers in a dandelion field but in this instance it is a bit restricted since it's in a conference room. 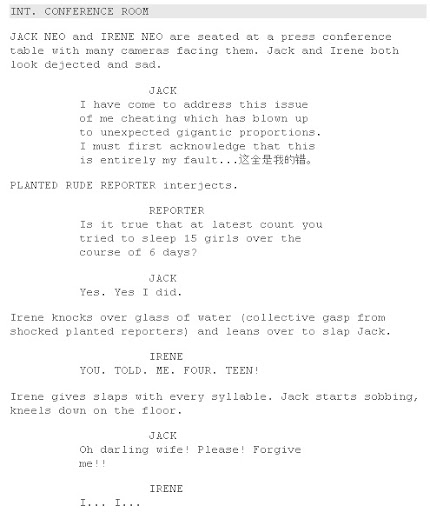 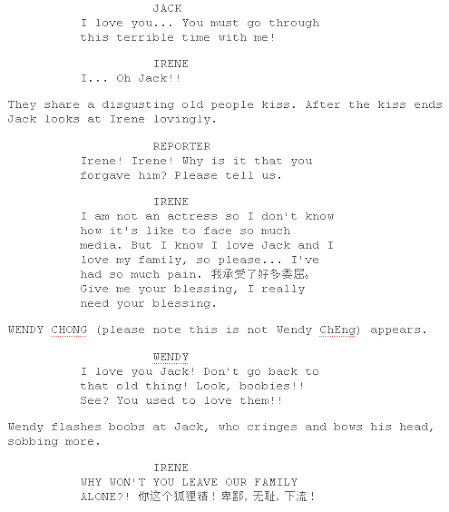 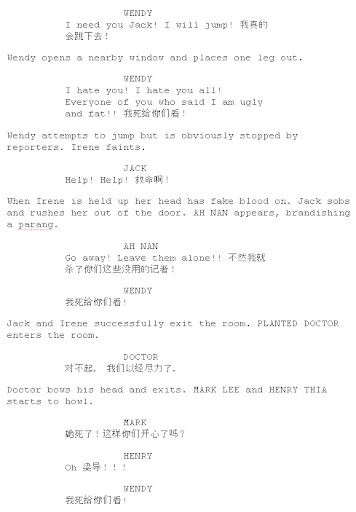 How's it? DRAMATIC NOT!!!!!!!! Obviously after that Irene will be miraculously "revived" lah. HEHEHE!!

Anyway people are gonna be asking me to give Irene a break etc etc. To this I say OH LIGHTEN UP!! It's a joke, ok!!


Do I believe she really fainted? I'd put my money on No, but probably felt a bit faint and played it up. You know, just like how the Ouija Board pointer moves. Is it real? Who knows? I know I pushed it sometimes.

Anyway she probably doesn't read my blog (I can't see it happening) and all of you idiots yelling "Leave them alone!" are just the hypocrites buying the papers so that you can yell more. Please. People truly disinterested won't even be chiding others about it and leaving dumb internet comments.

Everyone knows my views towards cheating. If there were so many girls, do think she only knew about his philandering ways recently?

EVERY-SINGLE-FUCKING-GIRL I know occasionally checks phones/fb/emails or at the very least expect calls to be picked up or know where their bf's/husband's location is.

These girls call him while he's with his wife (at least Wendy Chong says she does). If he leaves the room to pick up, is it not normal for his wife to ask who it is later? Is it that hard to catch a lie? Or maybe he leaves his phone in the room while showering and girls send him saucy smses? Is it not uncommon for the wife to pick up the ringing phone and see what the sms is?

She obviously has been tolerating this behaviour since a long time ago. She has come to terms with it. While she didn't do anything wrong, I don't see why this issue is so "hard" on her either. Everyone is just saying she's handling it very coolly and that she's a fab wife, very poor thing etc. NEED TO FAINT MEH?

Yeah yeah how would I know what she went thru... Please hor lao niang also got my fair share of shit coverage by the media ok! I mean obviously not as kua zhang as theirs but I also had endorsements dropped ok! I even had Wanbao mistaken me as another person and said I flashed boobies on my blog/have aids tested every 6 months -_-

So yeah can't really give sympathy for them because thus is the life of a famous person. GOT UPS WILL ALSO HAVE DOWNS!!!!!! Higher you go deeper you fall!! Cliched but true. :)


p/s: I have come to notice that cheaters tend to forgive cheaters. Not accusing Irene. Just making an observation amongst people I know. 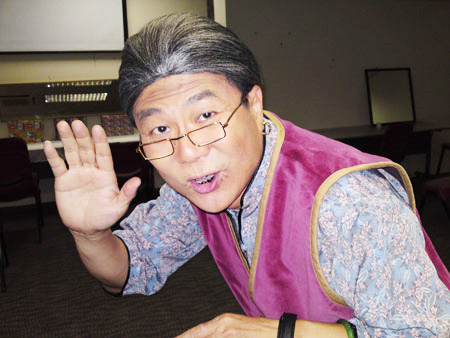 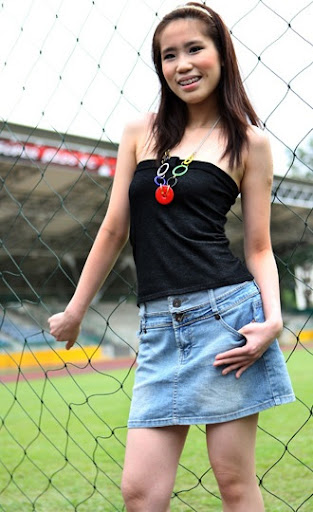 
Having sex with anybody is funny.
Hutch from Numbnuts? How about second granny kissing?
- March 17, 2010
Newer Post Older Post Home