So it has been about 1 month plus since I did my eye surgery. After 1 week of doing the surgery, I had to go back to remove my stitches!!

And I brought a companion with me... The Flip Mino HD camcorder! 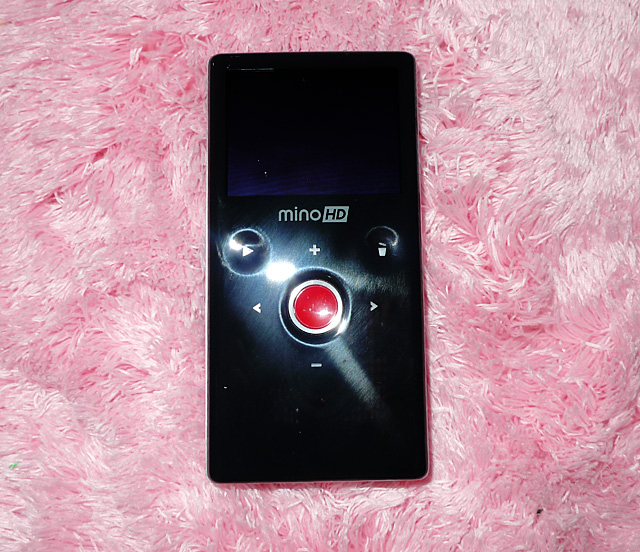 Sleek in front, and SUPER TINY. 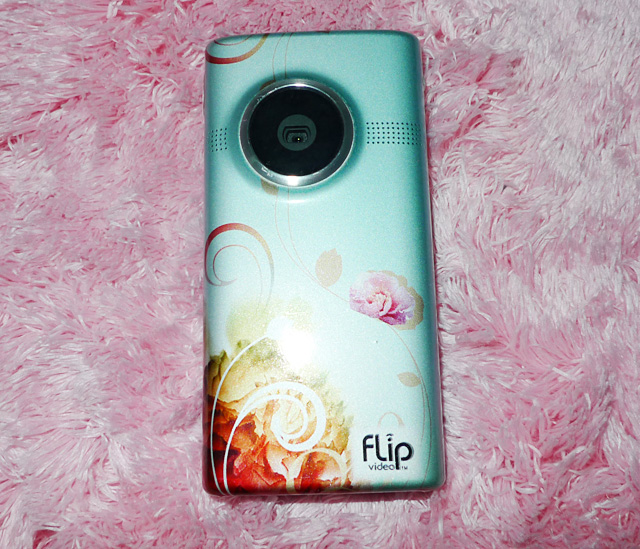 Customizable at the back!! Pretty or what!!
It can record 2 hours worth of videos and is super duper easy to operate. 1 click starts the recording, another click to stop.

You can watch the video you recorded on the 2 inch screen and delete it if you don't like it.

If you do, just press another button and the USB thingy pops up!! (Can also use it to hurt robbers ala switch knife I think) Insert that into your computer's USB port and drag and drop your spanking new videos!!

Talk about ease of video blogging!

Anyway the Flip camcorders are really popular in USA (I saw loads of ads when I was in Texas) but somehow video blogging doesn't seem to be the trend in Singapore. Maybe it's coz video cameras are so huge to lug around - but now you can record videos on HD with such a tiny device!

Sorry got carried away. As I was saying, I brought the Mino HD with me to JB to get my stitches removed!

And here's the resulting video:


There, for everyone who ever wanted to see me cry, haha...

The Flip Mino HD camcorder comes with pre-loaded Flipshare software, which makes emailing/uploading your videos a breeze, and even lets you edit individual clips as well as make custom movies and capture still image snapshots!

Just to elaborate more about the removal. My friend A who removed her stitches a week before me, actually told me it would not hurt at all, so I went into the room all calm and dandy. I guess hers healed much better than mine.

My right eye, as you can see on the video, is in a much worse state than the left. The wound was still raw, the eyelid was bruised (quite badly), and worst of all, my eyeball had this 1.5cm long blood clot that is VERY VERY SCARY LOOKING.

Honestly although the photo looks horrific I wasn't really in pain, just that it looks really gross and took super long to recover.

So yeah I went into a room and it was NURSES who did the removal for me, not the doctor. The doctor didn't even fucking see me.

(Actually I have doubts that they are real nurses)

And the moment the nurse saw me, she said, "WAH WHY YOUR EYE SO RED?" Hello?? Why don't you ask your doctor that question?!

On my right eye, flesh somehow grew OVER the stitches. There were 2 in total on each side.

So they begin by prying my eye wide open (that already hurts plus I kept thinking it will split), and used a pair of tweezers (as shown in video) to sort of try to dig out the stitches.

I don't know if it's just the nurse's fucking ineptitude or whatever, but my wound was still raw and tender and she just kept fucking poking at me for fucking 10 mins.

And I didn't get numbing cream, no local anesthesia, nothing.

Initially since I couldn't see what she was doing (obviously), I thought she was doing something necessary and just tolerated it. Like u know, part of a process of getting it done.

After that I realised she kept doing the same thing (digging) and had no intentions of stopping because she kept FAILING to dig out my stitches!

I begin to get so traumatized I started to whimper, then cry, then SOB.

I BEGGED them to stop because I couldn't take the pain anymore. I wanted to go back to gentle Dr Huang and his sophisticated equipment. I even told them just fucking leave the stitches inside and let me go, I don't care if I live with stitches forevermore.

After the "digging", this was what had to be done:

CAN YOU FUCKING IMAGINE THAT ON YOUR TENDER EYE CORNER!!
Never in my adult life have I ever cried over pain, seriously. I (think I) have a very high pain tolerance lor. Tattoos, ok. Wisdom teeth all 4 out at once... Never flinched. Brazilian waxing? Meh. Lip fillers? Child's play.

BUT THIS WAS HELL.

Even if you paid me $100,000, I will NOT go through this again, even if it means living with short, small eyes. Fuck this shit. I won't even wish this upon Plasticzilla.

I don't know how they managed to persuade me to finish up but they kept saying "Hen kuai de, yao hao le" (Almost done) and I let them.

The left eye's removal also hurt but it was not as painful as the right eye's. Tolerable, about 6/10.

And this - stitches removal for my right eye... is 9.8/10. I can only imagine how people who break their legs feel like but at least your leg only breaks once while this woman was digging in my eye non stop repeatedly for 20 whole minutes. -_-

When I stepped outside, still sobbing, one of the nurses said to me, "Oh poor thing cry until like this... You must be very scared of pain."

Although she was nice and polite throughout my ordeal and I'm sure she didn't mean it in a condescending way, it was still fucking offensive because MY FUCKING PAIN was not coz of my intolerance in any way but because YOUR DOCTOR SUCKS!

I sliced open my nose, stuffed something inside and had chucks of my alars cut off (literally chunks that were thrown away)... AND THE PAIN IS NOWHERE CLOSE!

I know I asked for it by being so vain and also being totally reckless but yeah lah I totally am regretting this man!!

Regret at being a cheapo: Priceless

And somemore, shittiest thing ever: 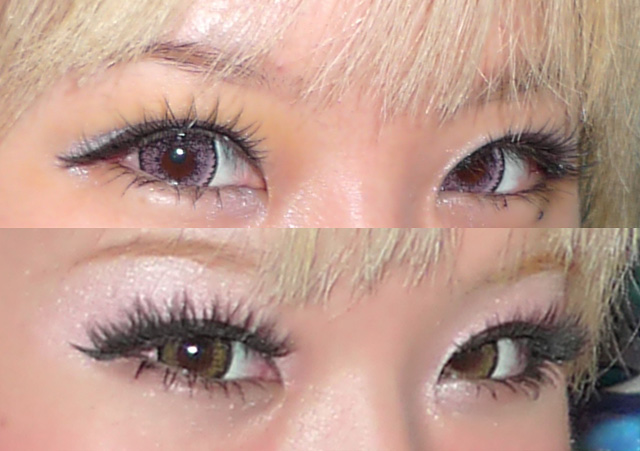 NOT MUCH DIFFERENCE FML MAXIMUM
Bottom is the before btw. I know the iris looks smaller but that's coz my fake eyelashes were more heavy in that photo.

My eyes look slightly bigger without make up but with make up is almost the same. I know I said it looks very different in my earlier blog post but I think it was only because it was so swollen??!! I don't know what happened lah maybe my eyes healed themselves -_-

So yeah I am NOT going to reveal the clinic's name because I know some of you still want to go there because you are a cheapo. There is no way I'd be held responsible if you somehow blind yourself there. And as for the argument that I should reveal the clinic's name to warn people not to go, well... Too fucking bad. Who ask you still go to JB clinic to do surgery after my horror story.


Ok lah enough gore shall end my blog post with a chio photo of the recovered eyes: 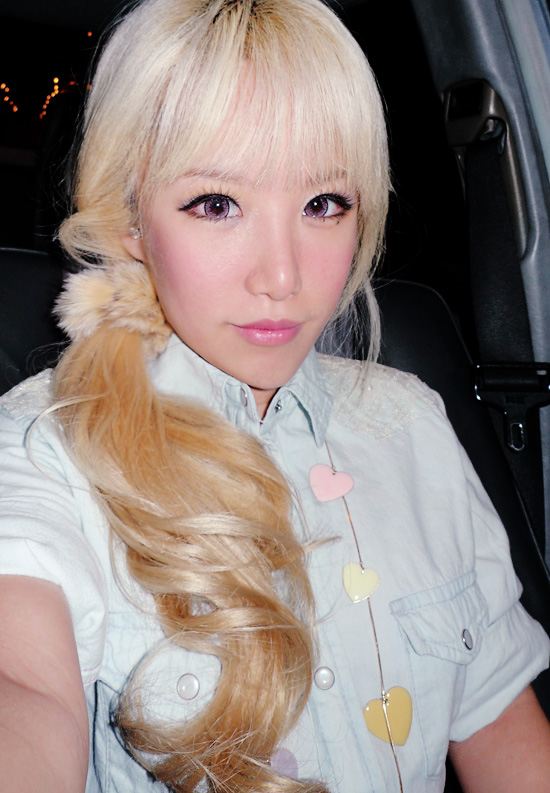 Yes everything is photoshopped INCLUDING eyes.

Thank you for capturing my emo face after the removal Flip Mino HD!! I am so not gonna do plastic surgery again***!!

(*** Coz Mike banned me from doing anything else)

Many designs customizable too! Yay!

p/s: I know there are a lot of adverts recently but well I went to Tokyo for 6 days and then my beloved pet died so understandably I have like zero inspiration to blog.
Advertorials