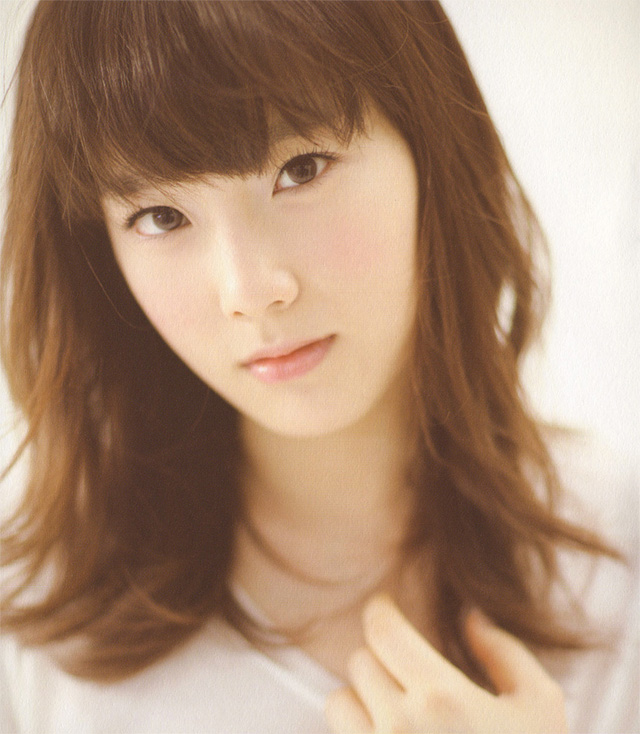 For those of you less familiar with Kpop, this chick's name is Taeyeon from Girls' Generation (or SNSD?). They (SNSD) are a singing pop group of NINE girls.

For the longest time people have been leaving comments saying that my post-photoshop self looks like her and I've always brushed it off.

Really meh???
Not that I'm chioer than her (far from it) but really don't look like what!! She looks so... clean. And my face is cluttered with silicon and falsies.

I can see a closer resemblance with Sun Ho (truly fml) than with Taeyeon. Or even Coco Lee. Once again is people one ah not I being buay paiseh!!

But then a few weeks ago, when I was in Simlim buying my new computer with Mike, something happened!!

While waiting for my computer to be set up, one of the monitors was playing a SNSD video clip.

And there stood Mike, looking entranced at the screen. I swear he even drooled. Normally whenever he sees like some girlish video, especially an mtv, he totally would not even bother looking but there he was, totally focused.

He told me he was in love with the one in yellow. She was dancing somewhere at the back. Out of 9 girls, he picked her immediately. Never in our history of being together for almost 5 years has he ever picked out a celebrity like that and told me he likes her.

And the one in yellow, ladies and gentlemen, is Taeyeon.

I am hereby convinced he likes her coz he loves me. Or girls who look like me. Whatever. Totally had a fuzzy heartwarming feeling right there at a grimy computer store. I swear I almost teared.

I personally find girl 5 or 6 (from left) the chioest. Too bad they look almost exactly alike. Most unchio is second from right. Haha

Speaking of people who look like me (whether or not I agree), some blog reader sent me a link to this mtv eons ago, telling me the female lead looks like me.

AND I REALLY THINK SHE DOES!!!!!!!!!! OBVIOUSLY she is much slimmer with a fabulous body and prettier face (so you can stop insulting me omg why I am so defensive it's all because of you cb mean people) but I really think got resemblance!! FHL lol... Actually when I saw the video I was like "WTF???", you know that feeling you get when you suddenly see a photo of yourself or something??

Wah lau I wish I was chio enough to be in an MTV lor with 2 hot guys fighting over me ccb.
- October 12, 2010
Newer Post Older Post Home