Note: Post updated below
A blog reader showed me this forum page where people who hate Michelle (Phan) were gossiping about our collaboration video. (See previous post)

These people scruntinize her videos, take her ugly screenshots to use as avatars, use childish varieties of her name as their usernames, and criticize her every move every single fucking day!! It's the most motherfucking sad thing I've ever seen, and I've seen godawful photos of that woman crushing a kitten with her high heeled shoes. OK fine those photos are the saddest but man this ranks HIGH on the sad scale!

This is how I expect Cinderella's step sisters will write if they were real.

I've already seen the forum thanks to overzealous blog readers sending me links to read before I met Michelle in case I am taken in by her devious ways and unscrupulous trickery (THIS IS SARCASM). -_- Thanks for the concern.

But now they are talking about ME too!!

I must say I'm a little happy because BY GOD! Too many people like me nowadays! I mean the swishy hair, the righteous justice dished to the uglies, the oh-so-furry eyes... What's there not to like? I jest. But seriously, I was just complaining that nobody gossips about me anymore! I blame it on being married. "Who is she fucking now?" is the best gossip topic ever. Who am I fucking now? Oh, Mike again.

But although I crave attention at every moment, some of the comments were still bloody annoying!

These girls (I know they are girls coz men only go FAPFAPFAP) go after Michelle like sharks on a menstrating seal coz they know that Michelle is nice and unconfrontational like that. But I'm not gonna let them write shit about me like that without fighting back!

So here are some of the more ridiculous things that were said:

These losers were complaining about everything under the sun you can possibly think of: Our complexion, Michelle's voice, Michelle's editing, how act cute we were etc...

One of them decided to say the dumbest statement of them all:

Erm... Which of the Disney Princesses are "by Disney" then??? Is it Snow White? Mulan? Or Pocahontas, born 1595, who time traveled to Walt Disney's era to get him to do a movie on her?

The little mermaid?
Yeah I don't care if she edited her embarrassing mistake. People who are presumptous and dumb like that should not be allowed to express their opinions. Nobody wants to hear them.

Someone pointed out the obvious... And that's their answer: Spending the time to save the video AND reupload it.

That's already so sad I almost can't bear to make it sadder... :( But here it is:

When someone has 1 million views on each video, YOUR ONE VIEW IS INSIGNIFICANT. YOU are insignificant.

There, I just made it sadder.

But thanks for noticing I have long blonde hair!! I like to brush it to the tune of Eric Clapton's "Wonderful Tonight".


♫ She puts on her make-up and brushes her long blonde hair.
And then she asks me, "Do I look all right?"
And I say, "Yes, you look wonderful tonight." ♫♫
GOLLY! He is singing about me! 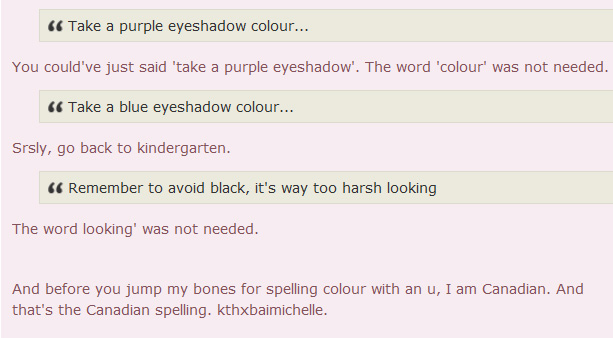 Just WOW. Listening to Michelle's video over and over to pick out her grammar mistakes (which were not really wrong in the first place)?

People are not gonna "jump your bones" for writing "colour" - People wanna rape you with a bayonet coz NOBODY LIKES GRAMMAR NAZIs. Especially the ones that aren't even accurate! 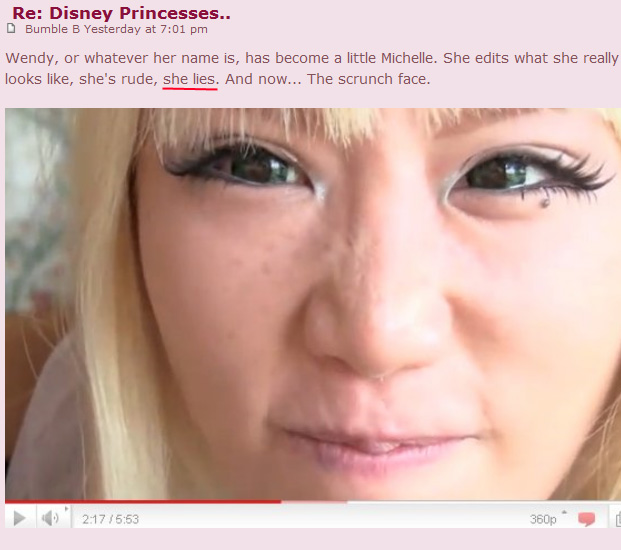 Please tell me one lie I told. It can't be a contradicting opinion like I said I hate blue then later said I like blue-green coz people can change their minds. It must be a straight-out lie like I said I have 13 inbred children who are all musically inclined but I don't.

If you can't find one, then don't yak rubbish.

And my scrunch face is cute!! Cmon, don't fight it. LOL!

I detest people calling me materialistic!! I take pride in shopping at This Fashion and don't even own a single branded bag (unless you count Juicy couture). Even my Reebonz Kate Spade bag I gave to my mom coz she liked it so much!

Talking about me
I really have to rant about this.

All these self-righteous MORONS all love to give fucking advice.

According to them, EVERYONE (except maybe Mother Teresa) should be less shallow/superficial, be less rude, do more charity, be less self-centered - and be "open" to their thinly-veiled criticism.

They claim to have all but good intentions and wish to sincerely change people to... better people. How kind!

As if they are all of those qualities, or everyone in their lives who might actually give a fuck about their opinions are already perfect.

All these do-gooder default qualities are preached over and over again to famous people. If someone is already all that, then they are said to be FAKE. Why? Because very rarely do people really put the world before themselves - and if they do, they are muthafucking boring and nobody gives a shit about them.

Yeah so you want me to listen to your dumbshit DEFAULT advice? Be "open" to criticism?

Sure I'd be less shallow and discuss quantum physics. You'd say I'm pretentious and boring.


Sure I'd put others before me. Sorry then, I won't have time to update this blog, so who would you impose your opinions on then?

So I say, LEAVE ME THE FUCK ALONE AND STOP TRYING TO CHANGE ME. It's not because I'm not open to your stupid criticism - it's because I've heard your suggestions so many times and it's DUMB. Don't think you are the only smart ass who ever asked me to stop swearing so much.

Don't be a hypocrite now. You asked me to be open to your criticism. How about YOU ANONYMOUS LOSERS be open to my criticism too? Here's what I think: Stop writing shit on forums!! Look at a puppy and cheer yourself up!

I may be a lot of things, but at least I'm not some advise-churning goody two shoes. I only give useful advice such as the above. With the exception of serial killers, rapists, smokers who smoke near to me and food vendors who insist on putting parsley in my food, I won't want anyone to change! Be shallow! Be superficial! Be selfish! You at least make the world interesting.

And how do you tell someone you are not in denial when you are denying that you are in denial? Tough one.

Yeah I've been trying to be Dawn Yang for a long time!! I'd love to have my blog readership go down 20 fold (Blogger queen? Pah! Titles), not be happily married anymore and have armpit stubble. :(

And for the last time although my nickname for Plasticzilla is as such, I dislike her NOT because she's plastic in the most unthinkable places (I am actually fascinated by this) but because she is a liar, a plagiarizer, and she tried to sue me. Don't know if you guys have been sued presented some sort of lawyer's letter before but it IS NOT NICE. Yeah yeah I started it. Whatever.

And the second part - just wow! If I ever get over my feud with PZ I'd ask her and Michelle and Arissa to do a drama serial!! These people should be scriptwriters! 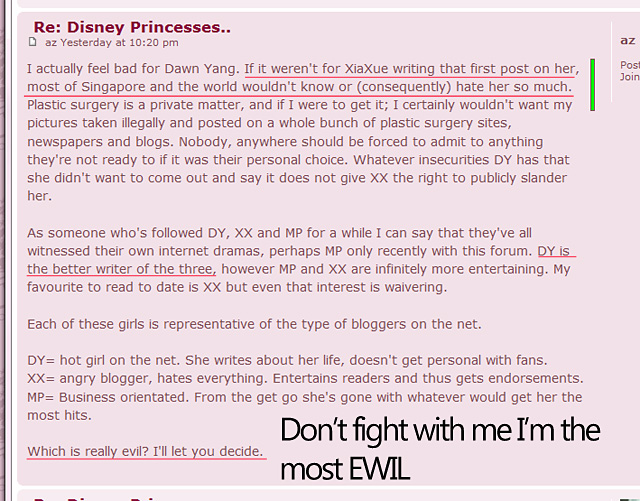 Dude why am I suddenly the one who made everyone hate Dawn? Her plastic surgery expose in 2005 was not done by me ok! But what would this person know, she thinks PZ is the best "writer"!!! Aw, I'm sure her writing is fantabulous coz it's all copied from famous authors. :)

And an important question. WHO AMONG US IS REALLY EVIL????????

Yes. This forum hater sincerely thinks bloggers and youtube gurus are "evil", and it's very important to figure out which one of us is. LOL

Hide your kids hide your wife and hide your husband coz they rapin' everybody out here!

OEI! You can insult me but do not insult Japanese make up! Just coz you've never seen it done don't seem it's doesn't work! My make up skills are pretty damn good - it's just fucking hard to put on eyeliner by just looking at a camcorder's screen, ok? You fucking try it and show me how you do it much better then.

And I won't tell you my certified by Mensa IQ coz that'd further make you feel inadequate. AND my skin is pretty damn awesome wtf. *super defensive*

Don't know how Michelle can tolerate all these crazy sad fuckers. They say things like she faked her chicken pox (I saw her scars), that she did a nose job (she didn't, and trust me I should know) and even said she sent her pet bunny to be slaughtered! They can gabble away all day about Michelle's perceived flaws but they cannot deny how fucking sad it is that they are so obsessed with her.

After a good night's sleep I woke up to see that the losers have dedicated a thread to this blog post!! It's like they are trying so hard to prove me right or something???? Yabbering the same unfunny insults over and over again and agreeing with each other while thinking they are oh-so-clever. Hi-five!! Morons.

One of them were saying her IQ is 135 or whatever since she was 9 and that I can't possibly be accepted by Mensa?? IQ does not change with age honey, and 135? HAHAHA! 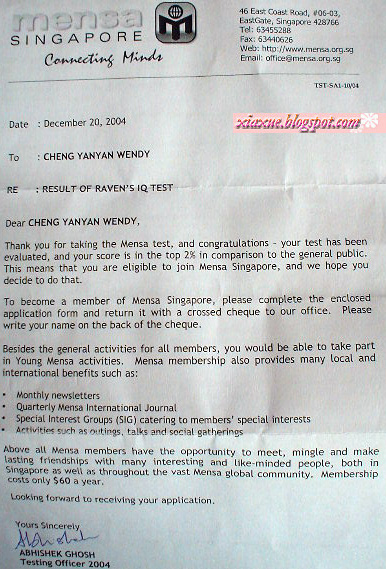 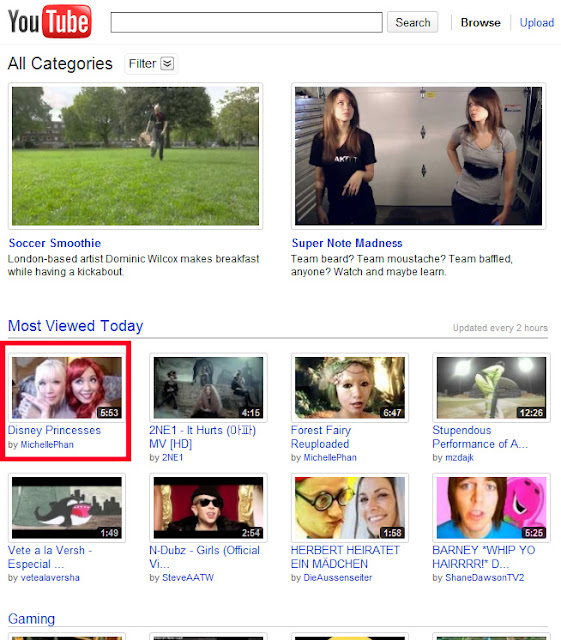 Number 1 most watched video on Youtube today.
Your argument is invalid.

Hold on, I'm printing it on a real classy trophy and putting it on display beside my other multiple trophies. Thanks for making Michelle and I famous, haters!! =)
- November 02, 2010
Newer Post Older Post Home