- March 29, 2011
Flying off at 9am tomorrow to San Francisco for another press junket!! And since I have a free day on the 31st I'm gonna take another flight to LA to meet Michelle (Phan) and jet back!! So exciting! Flight within a flight - INCEPTION!!

I know the Peter Coffin topic is getting stale and blah blah lay off him in case he commits suicide but I'm still gonna blog a final conclusion post! And I'm not gonna try to hate on him more, but instead trying to, erm, clear his name.

Afterall, people who are following the saga would have known that since his name got villified everywhere, Peter has not being hiding. No sire! He took to twitter and reddit to change public opinion and even gave a phone interview!

His official stance (I think) is that Kimi is not created by him and somehow duped him into the saddest internet love story ever seen. But he seems to... waver a little in his statements so for those of you interested, here they are, chronologically:

First things first. Let's establish that Kimi Koyabashi, whether "she" was created by Peter Coffin or not, is NOT a female. I can say with almost 100% certainty that even the least feminine of females will not talk about how her vagina looks like a pug, or worse, bother to answer all these dumb sexual questions. (Scroll down more to read the ridiculous questions answered)

Now we go back to about 15 months ago (my bad, not 8 months, which is when he admitted on twitter that they were a power couple), in December 2010 when Peter got to know Kimi.

Is Peter really allowing some random dude watch him sleep over webcam? CREEPY. 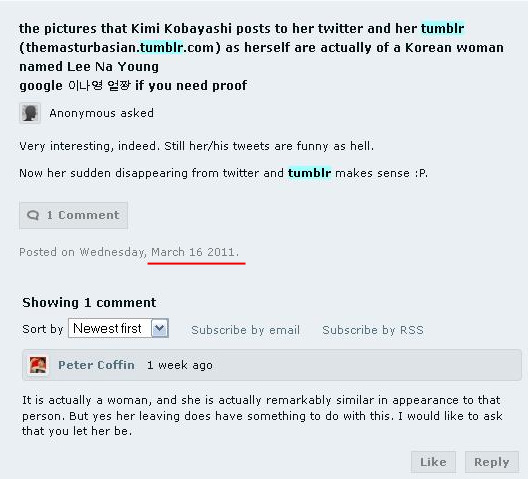 Someone found out Kimi is fake and notified Peter not only via a private email, but also posted it on his blog.

March 24th, after the expose on my blog: 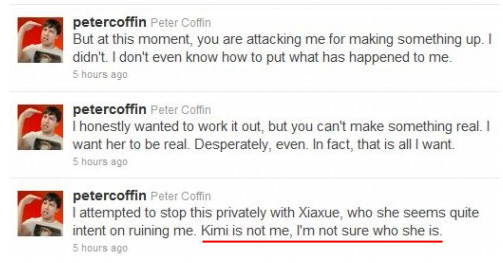 
And he wants her to be real... Why is he heartbroken when she IS real, totally gorgeous to boot?? Didn't she just chat with him on the phone etc? Aren't they still together, braving through this?

Wait... I'm really confused now. So he found out this girl (as improbable as that is) was using someone's fake photos. Then he was sad for like a day while Kimi deleted evidence, but was since he saw how she looks like and she is pretty like Lee Na Young, he forgave her and declared they are still an item.

Logical question 1: When you find out your girlfriend has been impersonating someone online, you are ok with that? You won't find out who she really is before deciding to forgive her? So how can he have no idea who made Kimi up?

Logical question 2: Presumably, since Kimi has been with Peter for over a year now, she must have developed feelings for him since no one can play a prank for so long. Where is she when he so needs her clarifications now? Why isn't she admitting that she created these fake profiles to save her boyfriend from so much embarrassment?

Peter on Village Voice
Wait, no... WHAT? Now he is fearing he has been speaking to a man?? Kimi is a tranny???


And then this, my favourite: 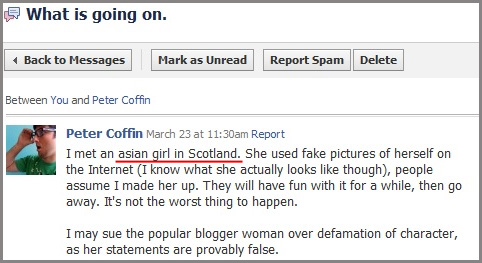 From a redditor who fb messaged Peter.


So now we know... Kimi is from Scotland, is of an ambiguous gender and is totally mystical when she comes to whether or not she EXISTS!!!

OH MY GOD GUYS I SOLVED IT.

I FOUND OUT WHO KIMI IS!! 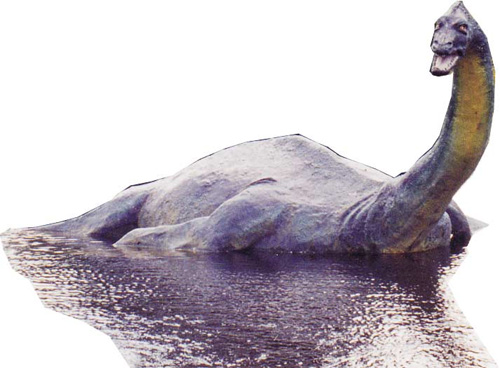 LOL... Seriously, here's a printscreen of their conversation: 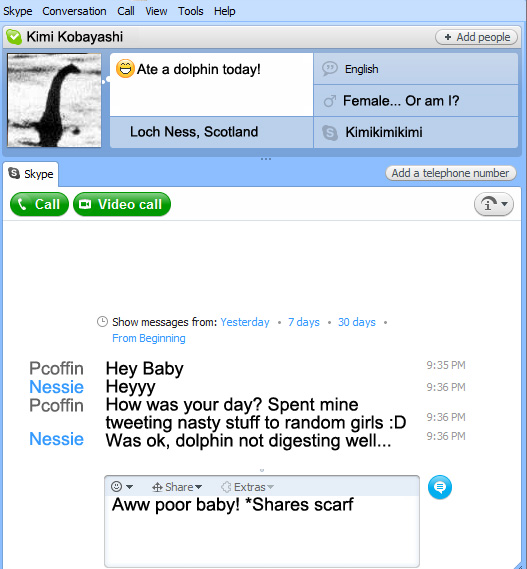 Ok I made that up.
By now you should have realised I am not exactly clearing Peter's name. Seriously, after he started emo-tweeting I felt really guilty and decided not to bother him anymore. He sounded genuinely sad.

Then he went to Reddit and tried to smear my name in order to get the attention away from him. So fuck him.

Alright I know blah blah this is too much. Last post on Coffin I swear! 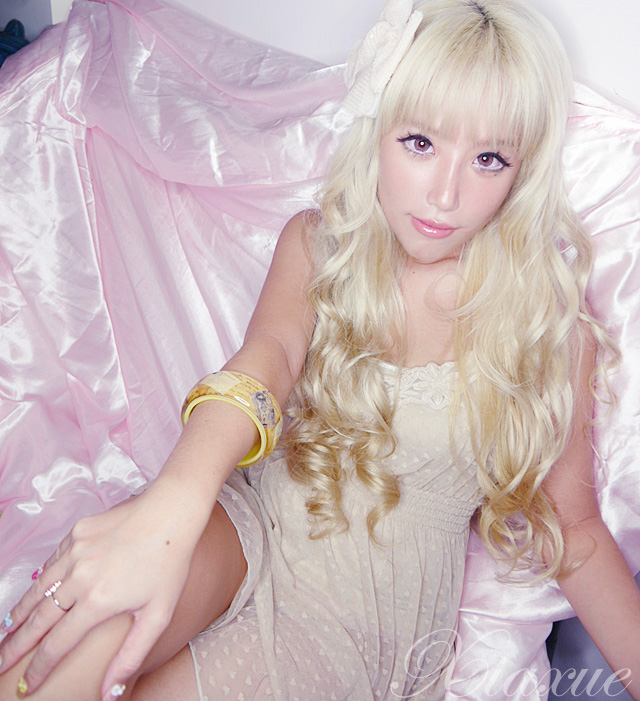 Please help vote for me!!

So if you wanna "sabotage" me, go ahead and vote HERE!