Peter Coffin is his own legal team

Received an email from Peter Coffin!!

Lawyerly disclaimer time: The reproduction of this letter and the contents therein shall not be construed as any admission of liability on my part and without prejudice to my rights, defences and remedies under any applicable laws.

The above is written by a real lawyer (I'm sure older readers can guess who) because I have real friends :D 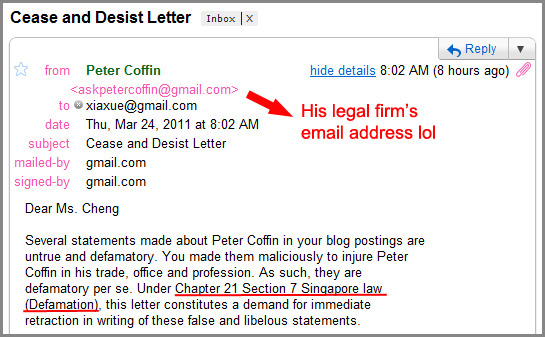 Lawyer friend: "Censor the firm's name if you are going to post."

Me: "There is no firm, it's sent under his own email."

Money paid recoverable.
7. —(1) Any money or valuable thing received by any person convicted under section 5 (3) as a deposit on or in settlement of any bet or wager shall be deemed to have been received to or for the use of the person from whom it was received.
(2) Such money or valuable thing, or the value thereof, may be recovered accordingly with full costs of suit in any court of competent jurisdiction.

Is he full of FAIL or what??? So embarrassing to anyhow reference the wrong section!


(LINK to video in case he disables embedding)

Ironically, that video announcing he is turning into a full-time youtube artiste has only 976 views since December 2010. And he says people care about his videos say whhhhhhhhhuuut?

So here's evidence. You need attention to do well in your job and instead of letting you whore for it, I'm giving you a substantial amount of free publicity!

It's like instead of having to suck cock for money, someone sucks your cock AND gives you money. Your google ad dollars must be jumping off the meter! AND YOU WANT TO SUE ME?? WHY??

Btw I'm gonna be charging you $3,500 for this blog entry. Most effective advertorial ever. Otherwise, how can you get on Reddit and somehow manage to get Michelle Phan and Ray William Johnson to link ya?

Right. I knew he was gonna go this route because it is the easiest way out.

Here's my opinion on why I think that Kimi is Peter:

1) Their writing style is exactly the same, and very distinctive.

Kimi's profile is certainly not written by a female and if it's a guy... well gay guys don't go for ugly men. I mean seriously, if you are gonna create a fake profile to flirt with someone, why Peter Coffin? Not famous, not funny, not good-looking. Choose Zac Efron maybe!

That leaves the option that it's written by a straight man perhaps trying to trick Peter.

If that is so, Kimi should have exposed him good instead of deleting her twitter and blog like a scared puppy!

And where is Kimi now? Shouldn't he/she be defending Peter??


3) Peter has proclaimed many times how he is so smitten with Kimi. IF you have a girlfriend of 8 freaking months, is it even POSSIBLE that you have never met her or webcammed with her? 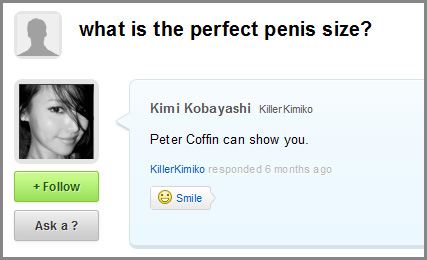 Their conversations (more than one) suggests physical contact. So.... Maybe Peter is half blind and was screwing a girl who was wearing a sack on her head with Lee Na Young's photo crudely printed on it?


4) When a reader of mine confronted Peter that Kimi is a Korean ulzzang, guess what the asshole's response was? "She exists. This is a complicated/private issue and I wish people would stop asking me about it."

He has since deleted the tweet (something to hide?) but I have a witness ok?

How would your reaction be when you find out you have been dating a fake girlfriend for 8 months? FURIOUS? Madly disappointed? Shocked?

Definitely not insisting that she is real and defending her still, right????

5) Even if Kimi is not Peter, which I'm sure nobody believes, my blog entry established that Peter is a loser. He is STILL a loser with a fake/imaginary girlfriend whom he is in love with despite never meeting or fucking her for the whole 8 months he was dating her.

Add naive to that too, since he believes someone who looks like that would ever fall in love with him. LOL

WTF is this? Did he just... prove point 2 correct? Thanks for admitting you insulted me unprovoked 5 times.

And btw, saying you insulted me does not constitute as defamation. But you insulting me... maybe. Can I have the 5 insults please? I am considering countersuing you. I'm sure the jury would love me. :D

Hate to repost shit but here it is, a barrage of your racist jokes: 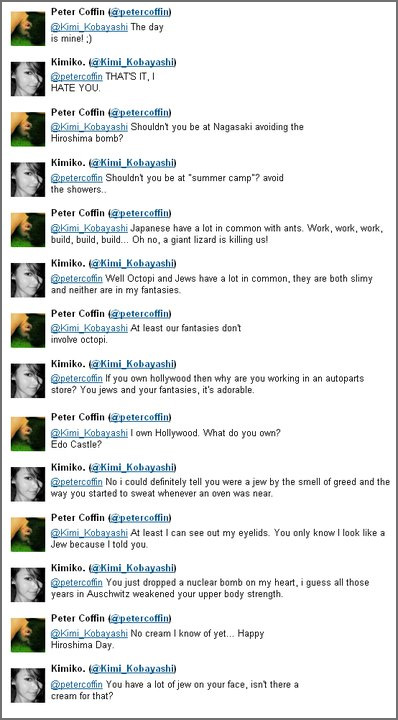 Or is that Peter Coffin dude not you either?

WHAT???????? NOoooooooooooo... This is too exciting for words!!
Please, send in those documents of you flirting with "Kimi" in the affidavit!! I'd LOVE to reproduce them on my blog, please please please!! 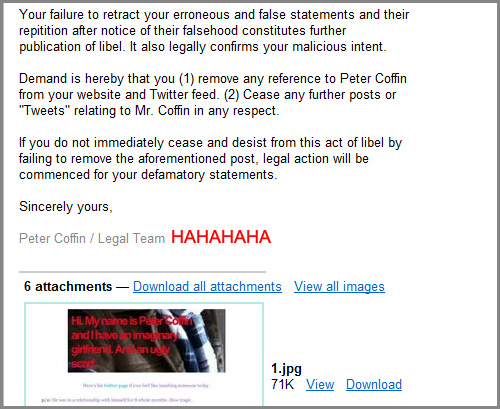 "Peter Coffin / Legal Team"? Which one is it? Make up your mind!!


Mike: "If he is his own girlfriend obviously he'd be his own legal TEAM too."


I call your bluff, Peter. Not the first time this has happened (the "lawyer's" letter).

Just letting you know, the last time it did the person is still suffering the consequences of it. But at least she didn't insult me by not even bothering to use a real lawyer. I suggest you let this die down quietly instead of pissing me off more.

Hey you might wanna get to know her, she creates multiple personalities to praise herself too! Oh and Asian as well! But she claims not to be fully Asian so just to let ya know. 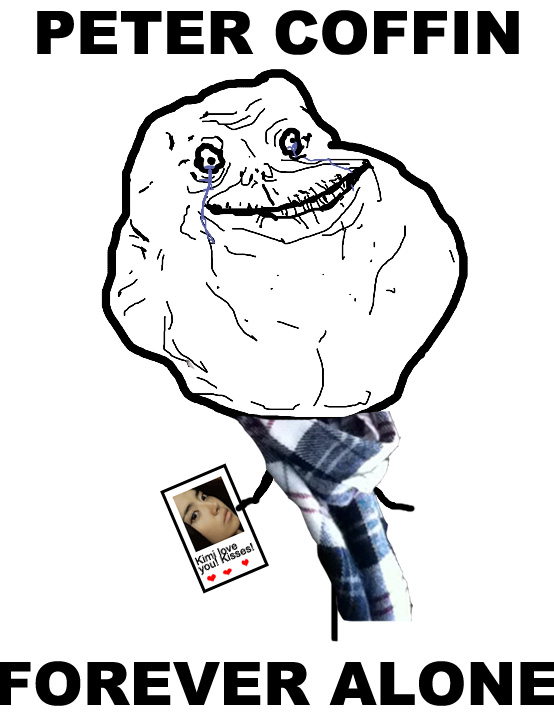 Couldn't resist.
Personalised for you Peter, with ya favourite scarf!