Psyche of A Plastic

Today's topic is plastic surgery - I know, again. But it's not about like woo I just did my eyes love it max blah blah... I'm gonna unload on you guys the psyche of a person who actually does multiple plastic surgeries, and go on a little about why people hate us so much.

I think it's cool and totally rare for a post like this coz most people who did plastic surgery are either too stupid to really put their thoughts into words or are unwilling to talk about their surgery. HAHAHA!!

Actually, you'd think that with so many who have undergone plastic surgery (hereby known as PS) before, society would be very accepting of it. Well... Yes and no.

I was thinking really hard that day. Why is it that someone doing corrective surgery on a cleft lip or doing braces is ok but a girl cutting her eyes bigger... not so ok? Both are improving looks, no?

But then I realised... It's all about greed.

Nobody gives a shit about ugly people fixing their teeth. Or a girl with absolutely no breasts getting a modest A cup implants to feel more feminine. Or a dude with one droopy eye fixing that eyelid. In fact, those stories are even a tad heart warming.

And nobody would call these people plastic because after surgery they don't look like perfect shiny plastic. They went from ugly to normal!

But a pretty girl with B cup boobs getting a boob job to make them DD?? OH NO YOU DIDN'T!!

What a slut! What she want such big boobs for? FUCKING GREEDY!!


If you were originally already good-looking, people hate you for wanting more.

And secondly, if you are very pretty but cheated your way up there with PS, people get angry coz it's UNFAIR.

If you think about it logically, it is actually fairer that somebody used hard-earned money to buy beauty. What's so fair about someone being born super gorgeous?

Song Hyo Kyo as a kid and teen 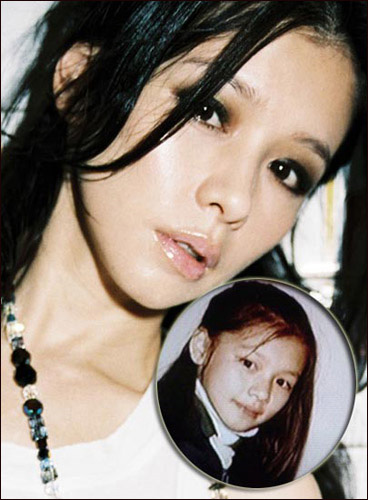 Young Vivian Hsu
Disgusting. Where got people so hot as freaking kids one??

People should respect fake beauties and say, "At least you went through pain and cash to get here instead of the natural bitches who had to do nothing." LOL!! CORRECT OR CORRECT!

(Only applicable to people who admit to their PS - lying is another issue altogether!!)

But the fact is... Most people who do PS ARE girls who are already not bad-looking to begin with. Greedy girls trying to inch slowly closer to perfection. I mean, why bother to give Notradamus a new nose? What a waste of time.


The word "plastic" or "fake" is probably the most common "insult" (In inverted commas coz I don't think it's an insult) I get nowadays. It's as easy as calling a girly dude a fag or calling a fat chick a pig.

It is as if my entire being consists only of my looks and calling my looks a facade will crush my ego to no end.

LOOK AT HER SO PRETTY BUT IT'S ALL FAKE.

Eh news to haters - I don't care. And I believe I speak for all my fellow PS-ed (whether plastic or photoshopped) beauties. We all don't give a fuck. It's the end result that counts, not your opinion on whether I cheated my way there.


Plastic/fake is not the only insult I get linked to plastic surgery.

People draw other conclusions too. Oh, she must be so insecure. Oh, she must really hate herself. She hates her race! She must be very inconfident and sad all the time. I might not look as good but at least I am comfortable in my own skin. Blah blah blah.

Maybe these are true for other people. I wouldn't know. But I believe I not crazy and my self accessment should be pretty accurate.

I've always been a very confident person, long before I've got any work done to my face. In school, I've never been the prettiest but I've always been popular (thick-skinned much?), whether with the boys or with the girls.

I hated my nose, true, but I did my best to distract people from it by enhancing my eyes with make up, and honestly, although I knew since age 15 that I'd eventually get a nose job, the hatred for my nose never really made me unhappy or insecure.

Well I guess nobody teased me about it coz I was so damn fierce.

I hung out with all the pretty girls in school! Guess I was Plastic before I was really Plastic hahaha. (Mean Girls reference)

Before I've had any work done I've always considered myself attractive. Not crazily so, but ok lah. Above average. I always made an effort to dress up what, which is more than most of the other 16 yr old girls can say.


So no, I don't believe that people who do PS are automatically insecure, inconfident and unhappy!!

Superficial? Yes. Shallow? Definitely. But what's wrong with that?

Most of us find a strength we've got and we try our best to improve on it. For some people it is, say, an interest in flying a fighter jet. Or being a good pianist.

For some of us... we are talented in beautifying things... and what's a better canvas than your own face?

An ah beng modifies his GTR. A writer improves his vocab. And I touch up my face with make up and photoshop. Parts I can't do, I get professional help from a surgeon. It's just an interest and I'm good at it - the hell I should get judged for it!

You might argue it's an incredibly self-absorbed interest that benefits no one. Rubbish. I've helped many people photoshop their pictures and put on make up before. And I give excellect PS advice!

BUT WHY? Why can't I accept my face the way it was born looking? Why do something so drastic? Do I hate it that much?

The same reason you'd hang a painting in your house... Coz I think it looks better with enhancements! You don't HATE your bare unfurnished house right? You just think it looks boring and could be improved.

But if you take away ALL of these consequences, most people would change at least something! Be it whiter teeth or uninverting their nipples or smoother hands. Confirm!!

So someone who does multiple surgeries, well, just don't give a shit about all the above! I'm not scared of pain. I don't need to pay. I absolutely trust my surgeon*** and his skills. And I am already known for being plastic so what's one more surgery?


When does it stop? When am I good-looking enough to not mess with my face again?

I can't answer that. I know I've promised Mike to not do anything else so I guess nothing in the near future? However, I'm still aging lah so goodness knows what else when I hit 40 or something? Yes yes I know you all fear for me looking like a freakozoid but don't worry lah ok!! I've got nothing planned so far!!

And the best thing is.... No matter how I look I'm still an awesome blogger!! Can't take that away!! LOL!

Eh btw Mike says that he prefers second nose job over first nose job (revised coz it was slanted, more about that in another entry) and original nose. WIN!!

If you guys wanna ask any other deep questions about PS go ahead I'd try to answer them. Not the nitty gritty stupid sort like "How much does a nose job cost" but the good sort like "Would you allow your daughter to do her whole face?"

(Ans: No, only areas I agree need drastic improvement like for example if she had my old nose.)


p/s: My post is not representative of the crazies who lie about their heritage or seem to have sincerely deluded themselves into thinking they only had 1 surgery when they had countless, ok? So no, not applicable to Plasticzilla.