Phew it's finally almost over!!

Since today is "Cooling off day" (whatever that means in the internet world) I thought I'd write a light post and put up some pictures of the PAP rally I attended a few hours ago! HOW? Hardworking not?

It's really funny coz Straits Times' twitter account tweeted a picture of Qiuqiu, Sophie and me at the rally and almost everyone who replied said we were "bimbos". I felt sorry for the two girls especially Sophie since she is actually more pro-opposition than pro-PAP (although she's not anti PAP either) so she didn't deserve all that hate, but I'm secretly happy coz "bimbo" means an attractive but stupid girl.

I am 100% confident I am smart (action: whipping out Mensa and PSLE thingy) so I don't care whether stupid people (or even smart but obtuse people) think I'm stupid. But I'm not 100% confident I'm attractive so thanks for the affirmation! :D :D :D


Here's more proof that I'm at least half a bimbo:

Drawing my face and hand before going to the rally! 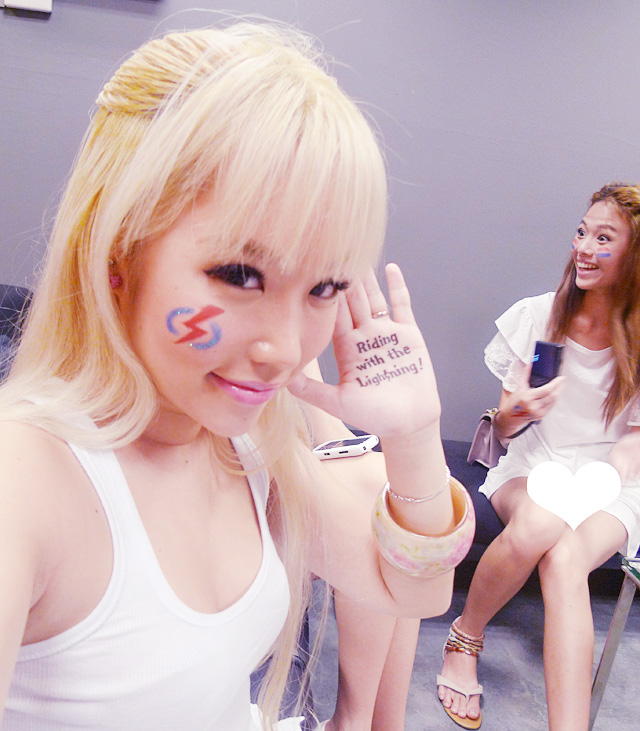 Love Qiuqiu's expression at the back looking a bit crazy. LOL 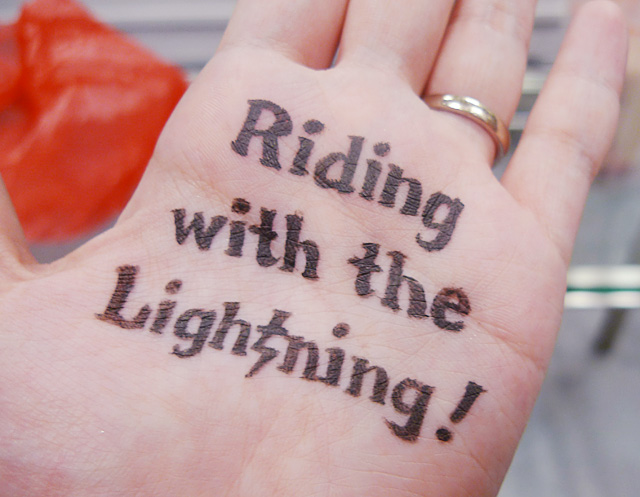 Credit to Rozz who coined it on her facebook (I think). She's super creative!!

Next time people ask you... WHO YOU VOTING?

What do you answer?

Give a cool smile and say...


"ME? I AM RIDING WITH THE LIGHTNING."

Qiuqiu said since I'm also a Harry Potter fan I should draw the lightning on my forehead. 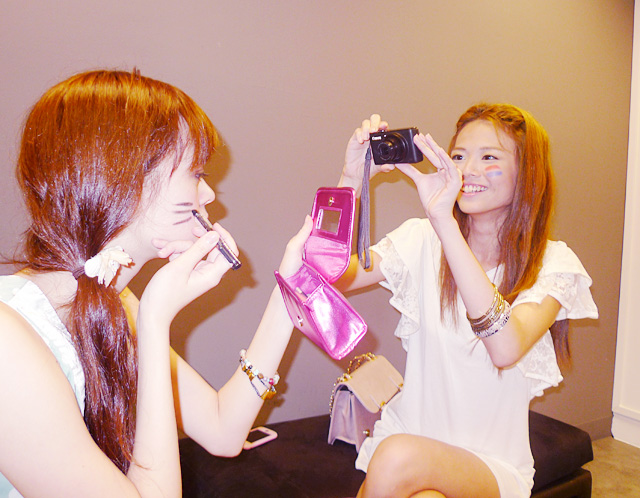 Sophie, bored while waiting for Gillian to finish work and drive there with us, decided to draw something on her face too. Since she is pro-opp/somewhat neutral (Boooo!) and cannot draw a hammer or she will get hamtum-ed at the rally, she drew cat whiskers.

Which probably contributed to us being called bimbos. 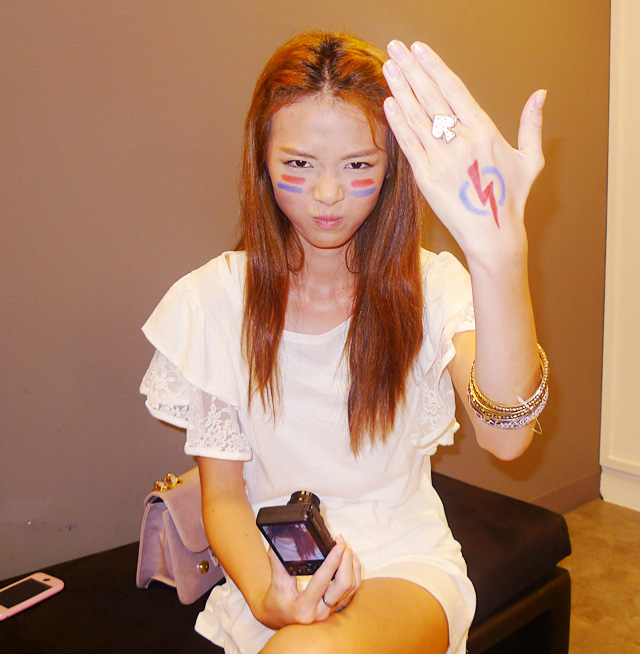 Here's Qiuqiu's war paint.
She said "How do I look?" after I took the pic and I said "Not good, look like one of the angry opposition uncles." 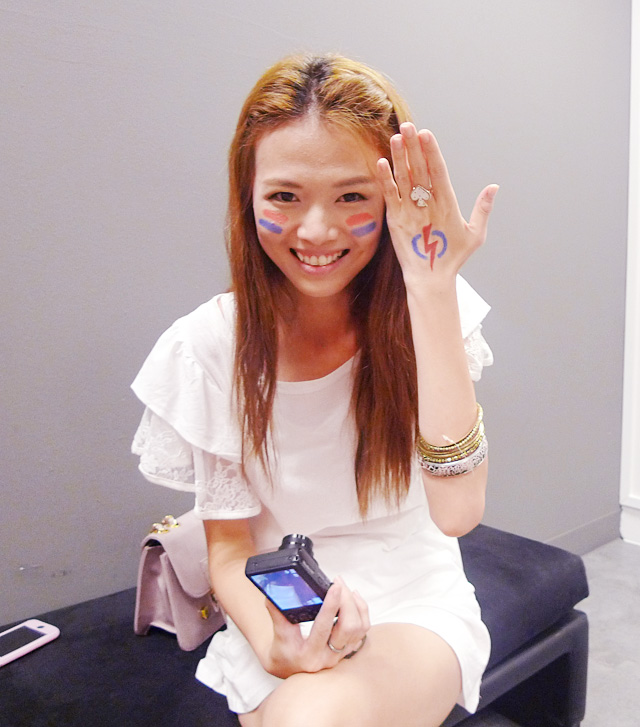 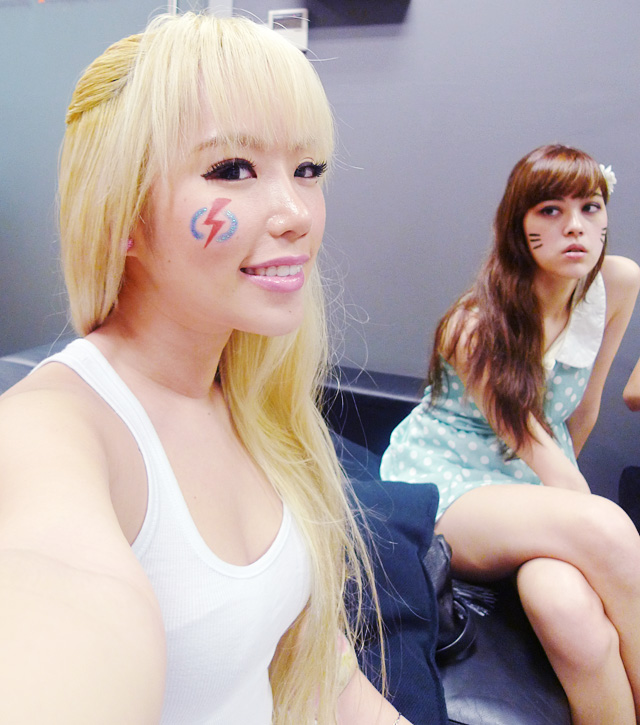 One more pic of my artwork :D 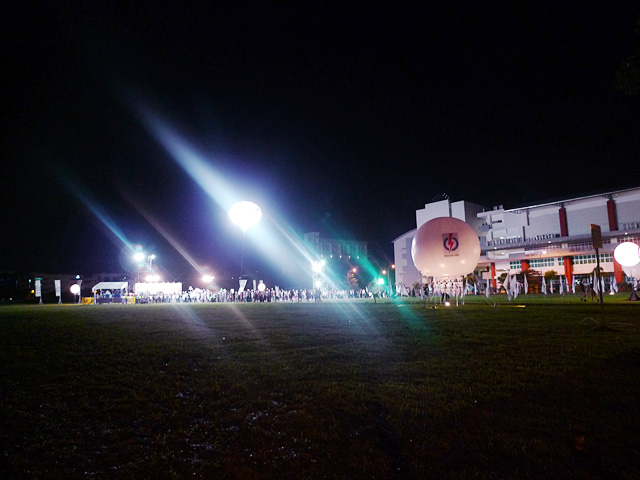 Reached the rally.
We were so lucky to get a good carpark slot coz someone pulled out when we went in!! 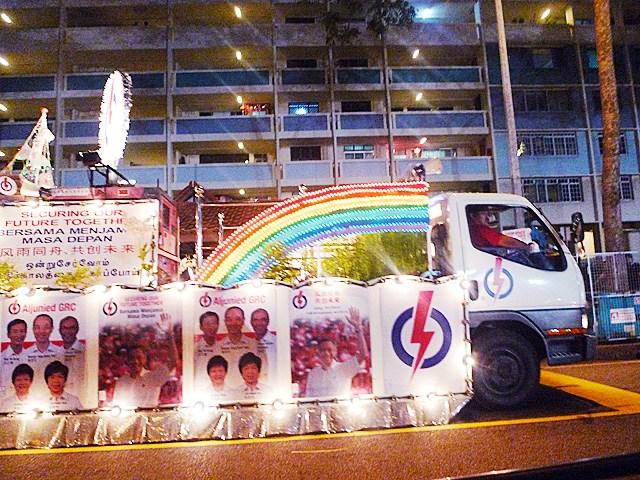 Love the PAP truck got rainbow one!!!! I believe they are trying to win the gay vote. 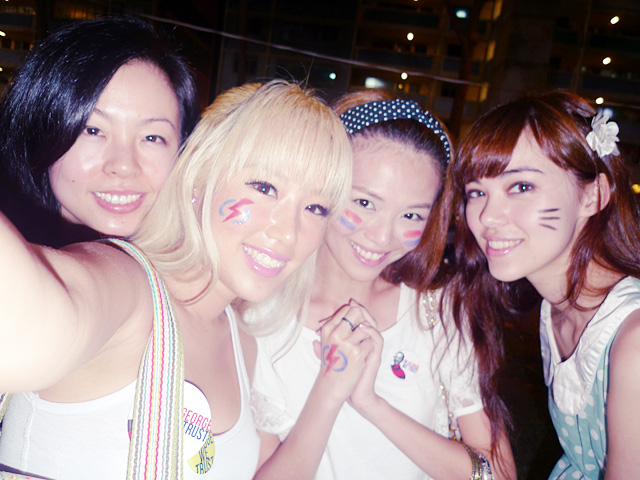 With Gillian too. And check out my cool badges!! Cute max 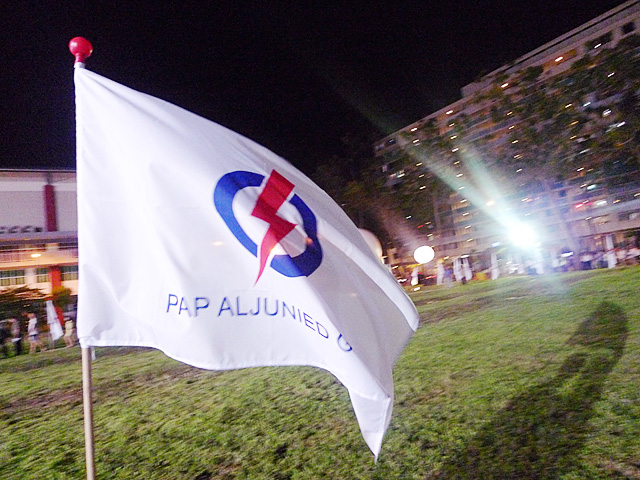 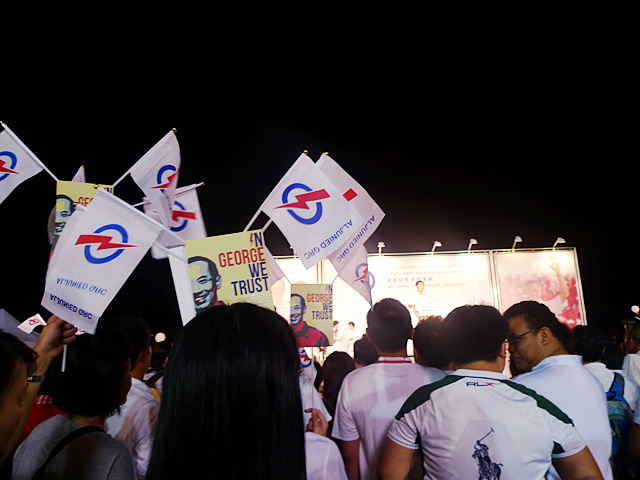 Minister George Yeo's supporters' creative use of the leaflets and flags! 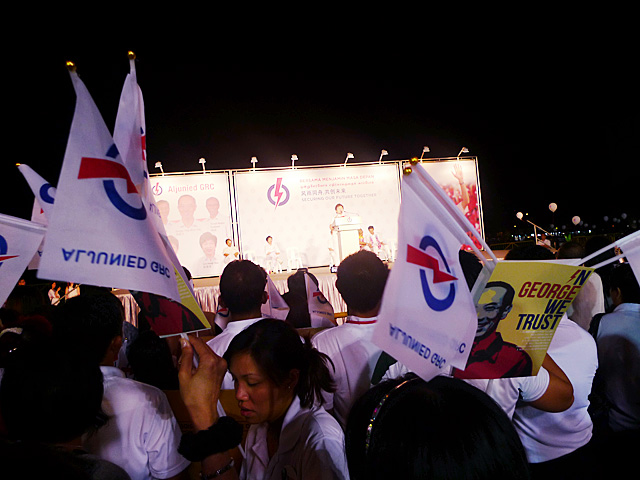 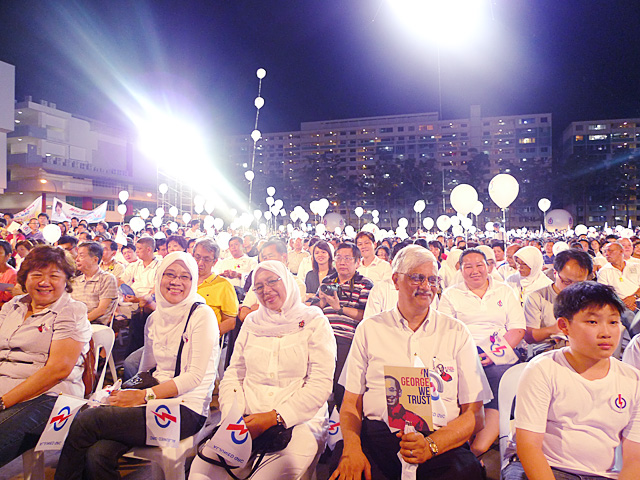 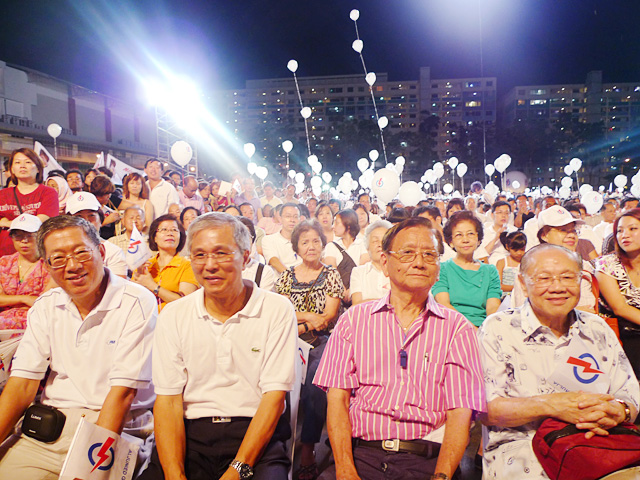 Happy PAP supporters who came early and got front row seats. Seeing them smile somehow warms my heart. I love my fellow Singaporeans!!!! (When they are not being excessively whiney, nitpicky and negative. Ahem) 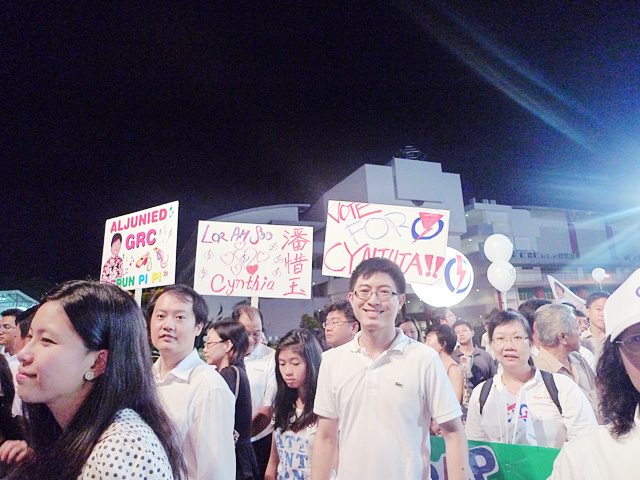 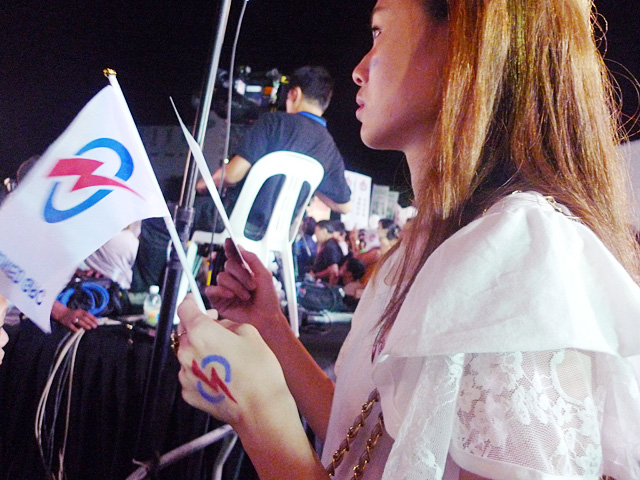 Qiuqiu very seriously listening to the speech coz she takes pride in being the first to yell a cheer. -_- 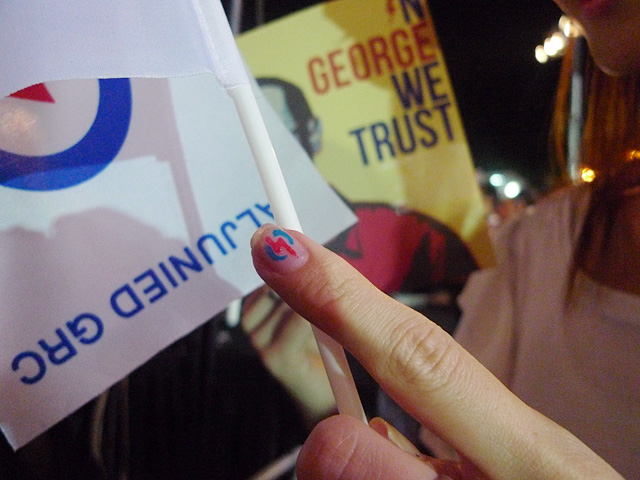 Got more siao not 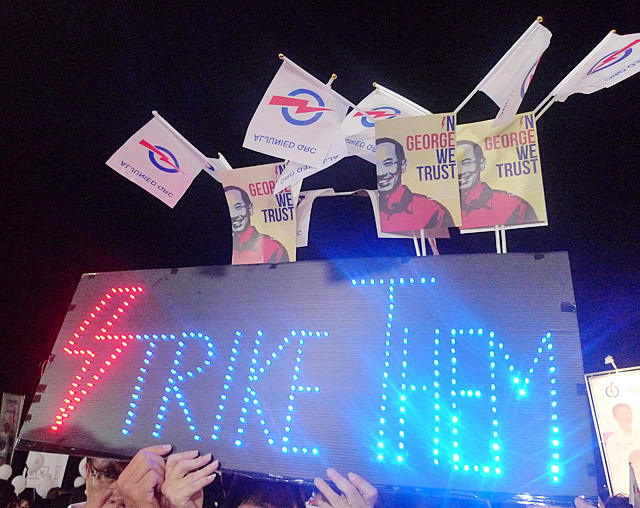 I super love this signboard!!!!!!! The lightning bolt will flash somemore!!!
George Yeo: "When we asked the WP where is their 5-year plan, they said no plans... They will use PAP's plans." *Shakes brainy head* 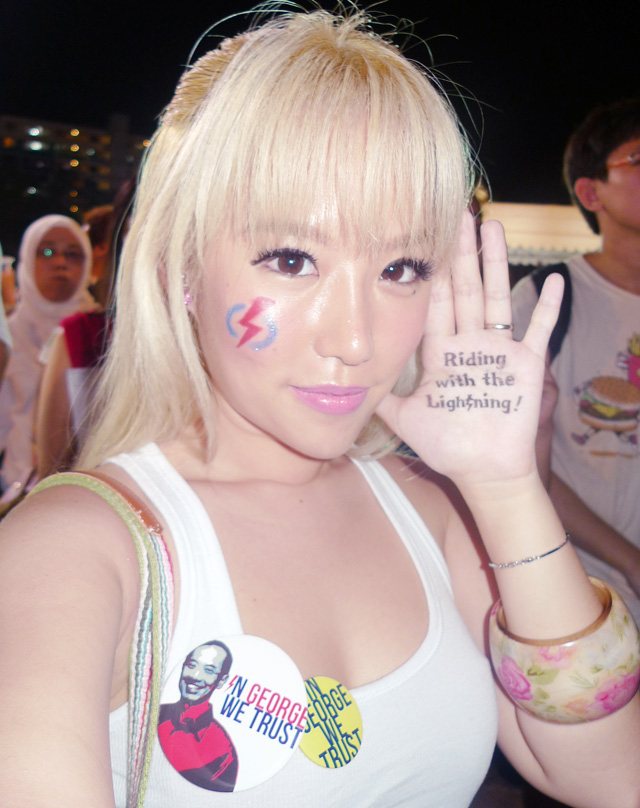 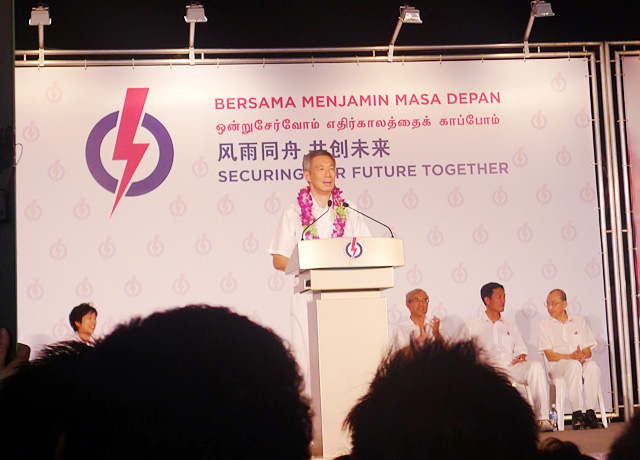 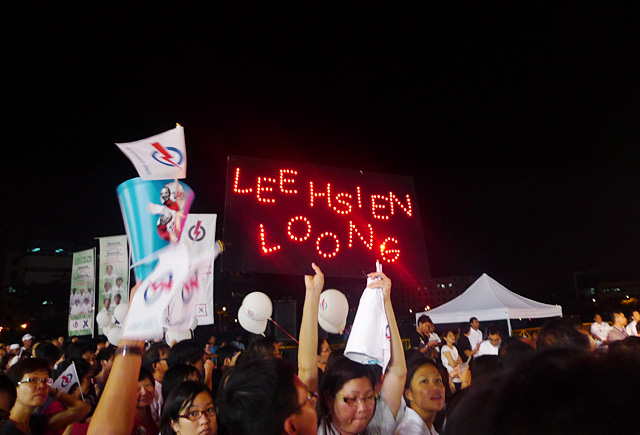 PM Lee speaking.
I know a lot of you are complaining about his apology. Frankly, I don't think he should have apologized for things that are not his fault. But you people wanted PAP to eat humble pie. Be less arrogant. Not do just what they want. Listen to the people.

He listened and he got slammed for it.

When are you going to forgive? Give him and PAP a second chance? Why everything they do you must twist to become something evil. They want the best for Singapore too.

Don't let your anger put the rest of your countrymen at stake. 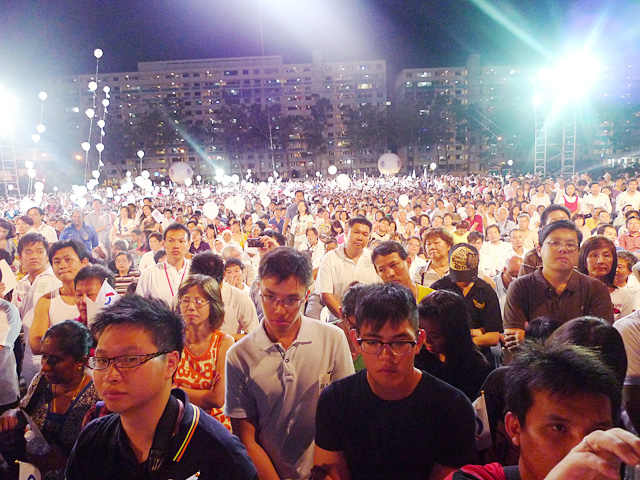 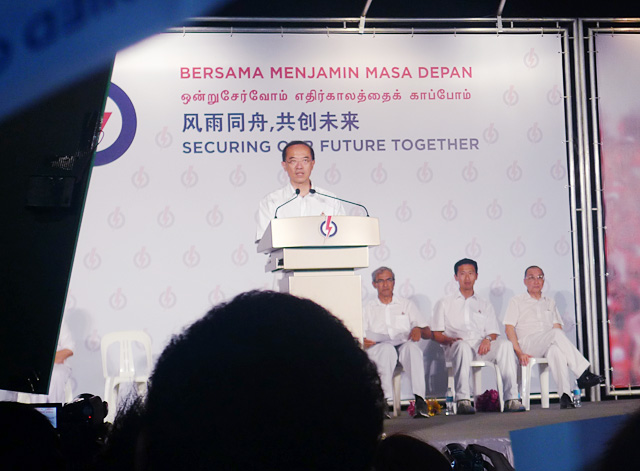 Whilst other MPs used speeches that were more charged, GY put forth a speech that was more sincere, heart-felt and touching. Of course, my own opinion. I'm sure those heartily anti-PAP will say he is putting on a show.

But I could feel how sad he is that he might stop being the MP in Aljunied after 23 years.

23 LONG years where he has done his best for the residents and ate, jogged, chatted with them. He even knows a lot of them by name. I can only imagine how that must feel like and pray that Aljunied GRC familes feel the same way about GY the way he feels about them.

And don't just take my word about what a fantastic minister George Yeo is.

Please, take a moment to watch the following videos from Aljunied residents.

Even if you are pro-opposition and hate me, just watch these.


Picking up rubbish after a rally can be faked.
Tears about $80 that deserved to be confiscated can be faked.

BUT THIS IS REAL WORK.

YEARS AND YEARS OF EFFORT AND HARD WORK THAT CANNOT BE FAKED.

If Singaporeans wish to lose such a good Minister to "give the other side a chance", then think about all these people and whether you are gambling away their chance at a better life with such a good MP. They don't wish that Aljunied be used as a gambling chip for the Workers' Party's grand plans.

Please remember GY is Singapore's Minister of Foreign Affairs so he flies around meeting dignitaries, diplomats, kings and presidents from all around the world.

Yet as he makes his way back into Singapore, he doesn't get consort with the elite and bathe in caviar (as I would) but visits Singapore's heartlanders to hear about their problems and try his best to help them. If he is a woman you can describe him as 进得了厨房,出得了厅堂, correct not?

Yet not a day passes where people yell at him (whether via fb, letters or IRL) expecting him to solve every minute issue of theirs. Some people are still ungrateful, unseeing to his goodness. SHIOK HOR? Not everyday Harvard Scholar will sit there let you yell leh.

Such a fucking thankless job. Yet people are thinking of kicking him out. It is OUR HONOUR, OUR BLESSING to have him on our side, building Singapore. A man with a big brain and an even bigger heart. We are so lucky.

As for the rest of us not staying in Aljunied...

In GY's final speech he mentioned how Singaporeans find that the government are no longer listening to them; too arrogant; out of touch with the citizens.


He said he will listen to us, learn from us, and fight for us. He will fight for a better, changed, improved PAP. And this he promised this in front of thousands of citizens who are all pining our hopes on him.

And I believe him. Because he is a man who ALWAYS delivers.

If you say you wish to vote opposition in to get more "voices" into the parliament, fine.

But just remember you are playing a very dangerous game here. 82 out of 87 seats are contested. Nobody can tell how many seats the PAP will win tomorrow. But judging from the overall sentiment, I'd say about 50% of people are strongly pro-opposition.

Because they are very unhappy with PAP. Because they want a change. And they don't really know what they will get with the opposition but they feel that their lives are so bad now that ANYTHING will be better than this. Let me tell you these people just don't know how good they've got it.

Another 30% perhaps want more voices in the parliament. Or among these are people who take voting lightly, thinking they'd support the underdog just because "Hiyah other people will still vote for PAP one lah".

If tomorrow PAP is, god forbid, a minority... And we form a coalition government (which has proven to almost never work), our country is doomed. And I know deep down, most Singaporeans still want PAP governing us.

You want more voices in the government?

But we also need more voices to say 'Hey, I still want PAP to rule leh. I vote them'. And right now that voice is SMALL.

How many of you are RIDING WITH THE LIGHTNING with me?? I wish I was at a rally so I can hear cheers. LOL

- Sorry I said this will be a light entry. It turned out not to be hahaha!!

IMPORTANT NOTE: I AM NOT BEING PAID BY THE PAP IN ANY WAY. If you think I can write blog entries like this without real conviction and passion, you must think very very highly of my blogging skills. And no amount of money can convince me to do harm for my own country which I love to death and intend to stay in till I DIE.


******************************
Hey hardcore ANTI PAP people... Can't you tell this blog belongs to ME by mere merit that I have so many photos of myself on it? I am therefore MODERATING and deleting any comments that do not suit my interest. Tyrannic? A little, but nobody is stopping you from setting up your own award-winning blog, innit?

So don't blame me when you 1,500 word essay gets deleted before anyone can even see it. 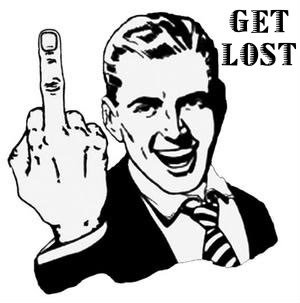